The Case of Perry Mason—and an Important Addition

Speaking of Perry Mason as we were yesterday, you might be interested to know that the first 19 episodes of the long-running TV series are now available on DVD. The series, as noted yesterday, often had an interesting noir-like atmosphere, and the characters, including the victims, suspects, and other non-recurring ones, were sharply drawn, and the incidents and conflicts handled with a nicely perceptive eye. The author of the original series of nearly 90 Perry Mason novels, Erle Stanley Gardner, oversaw production of the program, and it was very good television, especially during its first few years. The theme music to the show, by the way, is probably one of the most widely recognized TV themes of all time, and brilliantly sets the tone for the episodes. Upon hearing it I always reflexively feel a sense of anticipation and excitement.

I wrote a long essay a couple years ago about Erle Stanley Gardner, "The Case of the Bestselling Author," for the Weekly Standard, and it is available on their website here. I’ve included a few extracts in a posting below, to give you a sample.

The one thing I must add is that in the process of editing the piece to the right length for submission, I cut out the paragraph mentioning Gardner’s Bertha Cool and Donald Lam series of novels and failed to add their names to my list of other Gardner series characters, which is a major omission indeed. Gardner began his writing career producing hundreds of stories for the pulp magazines of the 1920s and ’30s, and he created numerous interesting series characters. Some of these characters are very interesting, and his extraordinary plotting ability—so impressive in the best Mason books—is evident in his pulp writings. My Weekly Standard article on Gardner includes a list of some of his pulp series characters.

After creating Perry Mason for his longrunning series of novels, Gardner greatly cut back his production for the pulps (largely moving on to the better-paying "slicks") and concentrated on series of novels. In addition to the Mason series, Gardner produced a series about a district attorney, Doug Selby, known as the "D.A." series. These are well worth reading, if you can find them. 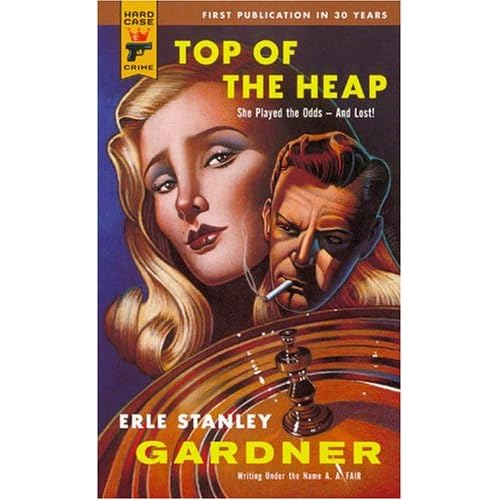 Even more popular, however, were the Bertha Cool and Donald Lam novels Gardner wrote under the name A. A. Fair. These were an amusing takeoff on Rex Stout’s Nero Wolfe series, with Cool as a tall, heavy-set woman with a loud, aggressive personality, and Lam as her short, unprepossessing, but intrepid investigator. Cool heads their detective agency and basically plays the Great Detective role, and Lam does the legwork for the firm, performing the great majority of the actual investigating. Gardner wrote nearly thirty of these books, and they can be very funny and, yes, superbly plotted, with lots of crazy twists and turns. Clearly Gardner had great fun composing these, and readers enjoyed them immensely.

Somebody really should bring these to television.

There is only one Cool and Lam novel currently in print, as far as I can determine, from the Hard Case Crime specialty house. Top of the Heap is a fine installment in the series.

Historian Douglas Greene is producing volumes collecting stories by several of Gardner’s pulp series characters for his excellent Crippen & Landru mystery press. The latest is The Casebook of Sidney Zoom, stories about a "wealthy yacht-owner who prowls at night to help the downtrodden in the days of the Great Depression." (Crusades to help the downtrodden were a common theme in all of Gardner’s writings and in his personal and professional life as well.)

The other Gardner collection currently available from Crippen and Landru is The Danger Zone and Other Stories, a group of tales featuring a variety of Gardner’s pulp heroes. These volumes are well worth having, and they are beautifully produced with the loving care Greene’s house gives all its books. Crippen and Landru has plans to release several more in this series, all edited by mystery writer Bill Pronzini, and there are numerous other excellent mystery collections available from this important publisher.

Thanks, Hunter. There are some two- or multi-novel volumes of Cool and Lam novels that were printed a few years ago and are available used through online bookstores and search engines. They’re well worth reading.

This is one of the greatest blog posts I’ve ever read. I’m going to have to find some of those Nero Wolfe take-off stories. Sounds fabulous.