Two forthcoming films featuring Sir Arthur Conan Doyle’s classic character Sherlock Holmes will take very different approaches to the material. Judging by the reports, each could be either very good or very bad.

Jud Apatow (The Forty Year Old Virgin, Knocked Up: Talladega Nights: The Ballad of Ricky Bobby) is producing a comedy film featuring Sacha Baron Cohen as Sherlock Holmes and Will Farrell as Dr. Watson. This obviously could be very funny if well-written, and just horrible if not. In addition, let us hope desperately that the two lead actors do not kiss in this film as they did in Talladega Nights: The Ballad of Ricky Bobby and subsequently upon receiving an honor at the MTV Movie Awards.

Variety quoted a studio executive as being highly enthusiastic about the project:

"Just the idea of Sacha and Will as Sherlock Holmes and Watson makes us laugh," said [Columbia Studios] co-prexy Matt Tolmach. "Sacha and Will are two of the funniest and most talented guys on the planet, and having them take on these two iconic characters is frankly hilarious."

The idea of Peter Cook and Dudley Moore as Holmes and Watson must have seemed a sure thing in 1980, and Paul Morrissey’s The Hound of the Baskervilles is somewhat amusing, but it would have benefited greatly from a better screenplay.

Although Farrell and Cohen are major comic talents, so were Cook and Moore. Ultimately, the quality of the script will decide whether the Farrell-Cohen film will be more like the classic Young Frankenstein or the not-classic Dracula: Dead and Loving It. 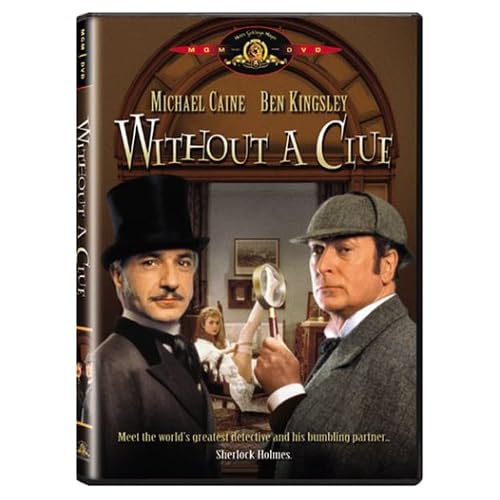 By the way, Without a Clue is a terrific comic film about Holmes and Watson, starring Michael Caine and Ben Kingsley. What’s even better is that its zany central idea actually comports with the real Sherlock Holmes canon—by turning the entire thing on its head. Definitely recommended.

The other forthcoming Holmes film likewise takes a somewhat unusual approach to the material.

Directed by Guy Ritchie (who made the excellent crime films Lock, Stock, and Two Smoking Barrels and Snatch), Sherlock Holmes will star Robert Downey Jr. as the great detective. Ritchie’s film will emphasize a side of Holmes and the stories that has too often been forgotten: his superb physical abilities and the strong doses of action in many of the stories.

These were, after all, the Adventures of Sherlock Holmes, as author Sir Arthur Conan Doyle titled the first volume of short stories about the character.

Thus there’s validity in Ritchie’s approach, and the only question is whether the script by Anthony Peckham and others will do it justice.

As the E! Online story about Ritchie’s forthcoming film notes:

In addition to Conan Doyle’s tales, Ritchie’s film will also incorporate the Sherlock Holmes comics series, which painted the detective as more of a muscly action hero who just happened to be far more brilliant than his peers—and, most importantly, his adversaries

Although depicting him as "a muscly action hero" would not be quite faithful to the books, one could certainly see Downey bringing off both sides of Holmes: the man of genius and the man of action.

Few adaptations thus far have managed to do so, which makes this effort very interesting indeed.

The two films are expected to reach theaters in 2010.

I believe that Basil Rathbone and Nigel Bruce were the best ever….The only bad thing was that they only made 14 films. There is not a week that goes by that I watch one or two of them,,,,, They were and are the best mystery movies every made……and I doubt very much that there would ever be any to top them…
Mike

Both of these films have the potential to be either wonderful or dreadful. With regard to the Ritchie/Downey version I think that Robert Downey Jr. would make a brilliant Watson but Adrian Brody would make a genius Holmes. Unfortunately genius is hard to write for, which is probably why the Hollywood hacks made Nigel Bruce’s Watson a buffoon. It made Rathbone’s Holmes look less stupid. Not to fault Rathbone. He was splendid. The scripts were bad.
The truth is that there have been pastiches and parodies of the Sherlock Holmes stories since 1891. One of the best was by James Barrie, a close friend of Conan Doyle. As for bad try reading “The Crown Diamond” a play by Arthur Conan Doyle that inspired his short story “The Mazarin Stone” which is generally held to be his worst effort.
“Without a Clue” might have failed with lesser actors in the leading roles. Apatow is capable of injecting real human feeling into his shtick. Whatever happens we can be sure that Sherlock will survive. Even his creator couldn’t kill him and he very sincerely tried.

Great points, Bob. I rather like Bruce’s characterization of Watson, actually; non-canonical though it be, it’s a charming character. However, your assessment of the damage those films did to people’s understanding of Doyle’s stories is surely true.
Lars–your point about the last season of the Brett series is a good one. It’s as if the producers simply went altogether mad. Very weak stuff, and Brett’s performance in them is all Brett and no Holmes.
Regarding the Cohen-Farrell film, it’s hard to imagine that they’re doing it because they love the stories madly and intend a comical tribute to them. No, although they may well like the Holmes stories, they’re probably simply using them as a device on which to hang lots of stupid gags. And I fear the sex and drugs angles will predominate, horribly.

I, too, like Jeremy Brett as Sherlock Holmes. He brought a depth to the character that I never expected was there. And the stories were taken seriously. It always distressed me that the Hollywood versions with Basil Rathbone were not only non-canonical but that the actors were mere caricatures of Doyle’s. I especially thought Nigel Bruce, who played Watson as a nincompoop, was way over the top.
Robert Downey Jr. as Holmes might be interesting. He’s a good actor, turning in fine performances even when he was strung out on drugs. (Let’s hope those days are over for good.) Like Mr. Walker, however, I don’t have much hope for Sascha Baron Cohen and Will Farrell. I can’t see them doing anything but shtick. Of course there was plenty of that in Young Frankenstein, too, but there was a good deal of love for the old films in it.I don’t understand why anyone finds Will Farrel funny.

Lars, you’re spot-on with your assessment of the Brett BBC productions. In my view, Basil Rathbone was the best Holmes, although nearly all of the Universal movies were highly non-canonical. Still, I think Rathbone caught the essence of the character.
But there’s still plenty of room for someone to top them all.

I can see seeing the Downey one. The S. B. Cohen one — no way.
The Jeremy Brett BBC productions are still the best, but he was (alas) a little too small and weedy. Until he got fat. And the last season got completely out of hand.