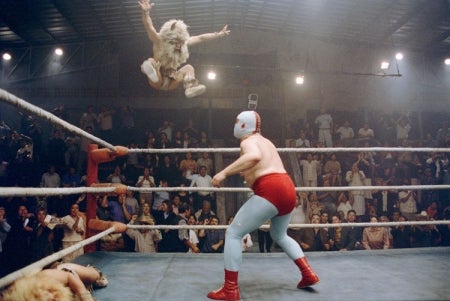 Nacho Libre, an unacknowledged, broadly comic remake of Rocky, is a real surprise. The film, a ludicrous comedy dealing with Mexican professional wrestling, is suffused not only with Christian imagery but with Christian ideas as well. It is full of religious faith and  expresses it with surprising and pleasing lightness.

The protagonist, Ignacio (Jack Black) is very religious, having been brought up in a Mexican orphanage run by Catholics. His father, he says, was a Catholic and his Mother a Lutheran, and they decided to stop trying to convert each other and get married. And then they died, which is how he ended up in the orphanage. As the film begins, he is working there as a cook.

While talking with a beautiful young nun named Encarnacion (Incarnation), Ignacio tells her that the monks at the orphanage don’t respect him: "They think I don’t know a buttload of crap about the Gospel—but I do!"

And when he decides to pursue his lifelong dream of becoming a professional, tag-team wrestler, he becomes very concerned when he learns that his partner has not been baptized. "I believe in science," the dirty, disheveled, slackjawed young man says, and that claim has never sounded more ridiculous. Later, Ignacio takes care of the problem by sneaking up behind him with a bowl of water and baptizing him.

Throughout the film, Ignacio frequently is shown wearing a cross necklace, and he and Sister Encarnacion both frequently make the sign of the cross over themselves.

With the money from his first fight, he buys delicious, healthy salads for all the children at the orphanage, who have been living on repulsive bean stew.

Ignacio has to keep his job a secret from the others at the monastery, because, as he notes, "It is in the Bible, not to wrestle your neighbor." Yet this is not depicted as hypocritical on his part, nor as excessive legalism on the part of the church; instead it is simply shown as a perfectly natural case of conflicting goals.

In search of worldly power, however, in the form of not being a hopelessly bad fighter, Ignacio goes against his beliefs at the behest of his partner, and eats eagle eggs because they will give him magic power.

Naturally, they don’t work at all, and the boys end up getting beat up by their next few opponents, including a couple of females.

The turning point for Ignacio comes in a conversation with Encarnacion, which the film handles quite seriously. Encarnacion tells him, "If you fight for something noble, or someone who needs help, only then will God bless you in battle." Up until this point, Ignacio has been fighting solely in order to gain fame and fortune, which have proven elusive, to say the least.

The very next scene shows Ignacio praying in the sanctuary, asking God to guide him. His prayer (heard in voiceover) is rather awkwardly expressed, and he accidentally starts his clothes on fire by knocking over a prayer candle, which returns the film to its main comic tone.

On the eve of the most important fight of his life, the one that could establish him as true professional, Ignacio gives an inspired speech: "Tonight I will fight the seven strongest men in town—maybe the world. And I will win, because our heavenly father will be in the ring with me. And he and  I will win 10,000 pesos. And with it, I will buy the orphans a big bus, to go on trips to parks, and places like that. I’m serious!"

Throughtout this scene and espcially noticeably as he walks away with determined steps, Ignacio’s clothing beautifully illustrates the film’s point about using worldly things in order to do God’s will: from the waist down are his flashy wrestling tights, and from the waist up are his monk’s robes, the bottom half having been burned off when they were set afire in the sanctuary.

The fire, of course, is well known as a symbol of the Holy Spirit, thus adding further religious imagery to the scene.

Before the climactic big fight, we find out that Ignacio’s former partner, Esqueleto, has become a Christian. They pray together, at Esqueleto’s suggestion, and Esqueleto in fact leads the prayer.

This is all done in a suitably zany way fitting in with the film’s comedic tone, yet throughout all the humor the film shows a strong and abiding respect for Christianity.

Thanks! This was a great analysis!

Nola–All is quite well. Of course I haven’t seen every movie ever made, or even a majority of them. The important thing is that I don’t dismiss categories of movies or other popular art as not worthy of attention, which means that I am able to write about a lot of things other critics miss. That’s one of the reasons for this site.
I enjoy your comments, but limitations on my time mean that I cannot always write a prompt response, if any. However, I read and vet every comment on the site, so the fact that a comment appears at all means that I didn’t have a problem with it. Please keep writing and commenting, as I greatly appreciate your musings.

Sam, are you okay? Because usually, you put your response too, not just post mine. Am I being too forward? I just asked you to e-mail me. I don’t know, but please don’t ignore me, that would be terrible.

Gosh, you really do know your movies. But, I don’t know, Carrie is the only horror movie I’ve seen that was made a few decades back. And also, Carrie was a creepy movie, and really freaked me out, so how do I know that the old Omen movie won’t scare me to death? And I’ve been thinking, since you’ve given me the sense you have seen every movie, which movies have you not seen? It would be very astounding if you said I’ve seen every movie. And, one more thing, I’ve read some of my past responses I’ve written, and feel completely embarrased on the fact that I ramble on and on. Sorry for boring you with tales about my evil friends and “amazing” job (I DO LOVE MY JOB, BUT IT CAN GET A LITTLE CRAZY). So, if you really want to talk to me about my life email me at nola_1984@yahoo.com. But if not, I’ll still be here to talk about movies. (I still expect you to e-mail me, but no pressure, ok?)

Nola, I would definitely recommend that you take a look at the original version of The Omen.

Wow, Sam. Most people get mad whenever I lie, but I guess you understand when you’re trying to impress someone. I believe that too, teaching is honorable. The kids are great, and I’m really learning a lot. Who knew that spending a few hours with first graders would give me life lessons? Most of my friends are ask why would I want to teach spoiled brats (I got so mad when they said that), but they don’t understand. Anyway, the movie I’m talking about is the remake one with Julia Stiles. I haven’t even seen the old one. I like The Omen a lot, mostly for its spooky ambiance and the kind of mystery it is. But, I would highly recommend not watching it at night, as I stupidly did. But, do you think I should rent a copy of the old one, because I bet it would give the new one a run for its money in the scare factor.

No problem, Nola; at least you owned up to it. Plus, teaching children is a highly honorable career.
Which version of The Omen are you referring to? The 1970s one or the recent remake? I liked them both, actually.

I’m sorry Sam, I lied. I don’t really go to film school. I’m a teacher’s aide for first graders. I’m sorry, it’s just being in film school is much more interesting than being a teacher’s aide. I’m hoping to get my teaching degree, so I can be a real teacher. Anyway,hope there are no hard feelings, and to make up for it, I know one movie that people would love to see you review: The Omen.Don’t judge me, I just really love that movie,because I love anything scary. Hope you can take my suggestion, and no hard feelings, right? Talk to you later, Sam…

You can call me Sam or S. T., Nola. Good luck on your career.
My insights into the meanings of films come from several years of academic study and then a couple of decades of watching movies and writing criticism. I look for themes and for evidence of the assumptions the characters hold.

Hey S.T. Karnick! Hey, what’s your first name, because I am getting kind of tired of greeting you with “Hey S.T. Karnick!” Yes, I’ll tell my friends to visit, if they’ll listen to me. Anyway, here’s my e-mail if you ever have anymore interesting topics to talk about, say: how do you tie religous concepts into movies, while I just sit there and watch them. Anyway, here’s my e-mail: nola_1984@yahoo.com, and don’t think anything about me giving random people I have just met my e-mail address, I just really like talking about movies since they are my hobby and I plan to work in the movies once I get out of film school! Talk to you later.

Thanks for your comment, Nola. What we do here is figure out why people do or don’t like movies and other works of popular or elite art, and why they should or shouldn’t. Please invite your friends to visit regularly!

Hey, remember me from the hidden meaning of No Country for Old Men? You really have it going on, huh S.T Karnick? I can never analyze movies, I just watch them and say, “I really like this movie.” And I liked Nacho Libre a lot. Oh, I’m sorry, I have to go, but I will come back and read your responses, because I know you would not let me down and not answer my questions. Until then, Nola.