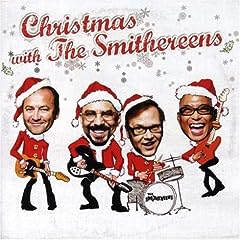 Everything happens in the Omniculture, and it seems that everybody makes a CD of Christmas songs eventually. USA Today provides a good roundup of this year’s Christmas CD releases.

It’s definitely a motley assortment. Of the entire listing, the only one that inspired me to make a purchase was Christmas with the Smithereens. It hasn’t arrived yet, but the songs I’ve heard are good, in that they sound like the Smithereens.

I was happy to hear that In Bruges, a by no means perfect but quite creative and interesting little crime drama (more of a drama about criminals, really) starring Colin Farrell and Brendan Gleeson, received Golden Globes nominations for those two actors and best musical or comedy picture.

The film has several funny moments, although it’s hardly a comedy, and its setting in the title city is quite appealing to the eyes. Both the nominated performances are indeed excellent (as is that of Ralph Fiennes). In addition, the moral dilemmas the characters confront are difficult and quite dramatically compelling. It’s well worth seeing.

For those who have read the recent articles on Anthony Burgess’s classic novel A Clockwork Orange in this publication and have become interested in reading it—as you really should, if you haven’t already done so—will benefit from this Nadsat glossary, which aids greatly in understanding the unique language used in the book.

I think the use of an imaginary language that involves sprinkling a few words from Russian and a couple of other languages into an English slang argot was a very good idea on Burgess’s part. It strengthens the reader’s awareness that the ideas and themes of the book are not limted to a particular people or a particular time but instead apply to the universal tendency of governments toward overrule and despotism.

It is a truly great novel and one of the very, very few must-read novels of the past half-century.