The movie musical Mamma Mia! finished a strong second to The Dark Knight in the weekend box office race last week—setting a record for its genre. 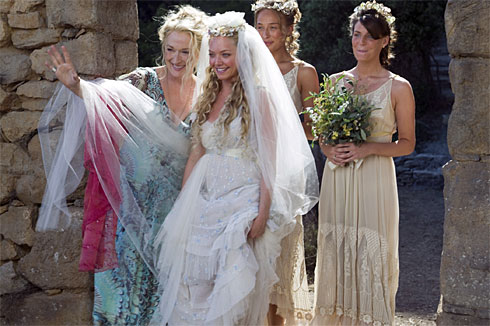 The movie musical Mamma Mia!, which is based on a stage play featuring the music of the pop-rock group Abba, set a record for the strongest opening weekend ever for a movie musical, besting the $27.5 million of last year’s Hairspray by approximately $100,000.

That’s a very impressive performance given the record number of people who flocked to see The Dark Knight. The Mamma Mia! success represents a triumph of what might be seen as a theatrical version ot counterprogramming, a common strategy employed in television.

In counterprogramming, a TV network responds to a popular show on another network by trying to appeal to a different audience demographic, as when a network counters a series popular with young males by running in the same time slot a program geared toward young females.

Certainly The Dark Knight appealed to a very wide audience, but its weakest segment was probably women over thirty. That was the group Mamma Mia! grabbed most effectively. As USA Today reported, "According to distributor Universal Pictures, 75% of the Mamma Mia! audience was female, 64% of them 30 and older."

According to the USA Today story, the weekend’s movie slate shattered the previous audience record: "more than $258 million poured into the box office, Nielsen EDI reported. The old record was $218 million over the weekend of July 2, 2006."

The studio’s choice to open Mamma Mia! on a weekend when multitudes of people would be going to the movies to see others among this year’s strong slate of summer release clearly was a smart one, but I think a good deal of the credit for the film’s opening-weekend success must go to Abba. Upon first seeing the trailer for Mamma Mia!, I was fairly certain it was not something I’d enjoy seeing, as it looked appallingly hokey, pseudo-earthy, cute, and estrogen-laced.

Seeing Meryl Streep dancing around in the trailer was a huge turnoff for me.

If you ever want to draw me to a Meryl Streep movie, show her jumping a brand-new Jaguar off a crumbling wooden ramp over a flaming river and crashing through a window of a burning warehouse while firing a shotgun at al Quaeda drug runners, and I’m there. Otherwise, no.

That is what I thought until I found out that Mamma Mia! was based on and used the music of Abba.

The fact is, Abba was a terrific pop group that made quite a few classic songs. My favorites include "Take a Chance on Me," "SOS," "Knowing Me, Knowing You," "Super Trouper," "Dancing Queen," and "Waterloo." If your favorites list differs, that only shows how many superb songs this band released.

Hence, I will see Mamma Mia! despite the distinct lack of explosions and delightful mayhem. Apparently wonders will never cease in the American culture.

this is one of the few plays i’ve actually seen, which ended up being great… it’s funny to think of ol’ Pierce taking a stab at singing, yeeesh