Why the Megastate Promotes Mass Immigration 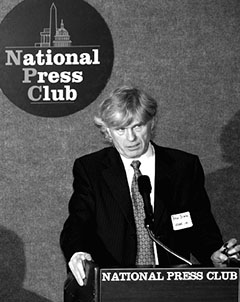 Let me begin by saying that I’m not a libertarian. In my view, libertarians are largely cultural and political theoreticians who continually entertain the charming notion that society ought to be organized along their particular lines of thought, that they have the Revealed Truth in their pockets (usually dog-eared copies of Atlas Shrugged), and that utilitarian methods will be triumphant and we needn’t repair to outmoded and irrelevant moral absolutes since there are no absolutes.

Libertarians evince a chronic disdain for Biblical morality; they may pay lip service to it, but they rightly regard it as an impediment to their carefully laid plans. Except for Marxism/socialism, I can’t think of any other coherent political philosophy more antithetical to the Biblical view of mankind than libertarianism.

Having said that, I must admit my admiration for a few libertarian thinkers, one of whom is Peter Brimelow. Thirteen years ago he published a book whose prescience is almost breathtaking: Alien Nation, the subject of which (erroneous misrepresentations notwithstanding) is the consequences of American government policy with respect to legal (not illegal) immigration, specifically the disastrous results of the 1965 Great Society legislation. Conservatives and liberals—and even other libertarians—have condemned Alien Nation since its first publication.

Brimelow recently gave a speech titled "Immigration is the Viagra of the State." A few of his statements regarding the implications of current U. S. policy and how they impact America’s cultural stability are extremely quotable:

Americans are taught to believe that they are "a nation of immigrants." Of course, all nations are nations of immigrants. There is no known case where people grew out of the ground. What’s different about America is the speed with which it was put together. Unfortunately, it can be unput together just as quickly. And that, in essence, is what’s happening. . . .

This is a transformation without precedent in the history of the world.  To adapt Brecht, the government is dissolving the people and electing a new one. . . .

And that’s the bottom line to this review of the U.S. situation, which I really want to stress. The point is that the status quo is statist. . . .

The Americans have had mass immigration before—notably the so-called Great Wave of  immigration from about 1880 through the 1920s, when it was cut off by legislation. And they’ve had a welfare state before, roughly since the New Deal in the 1930s. But they’ve never had both together. And they just don’t work. . . .

Further practical problems with immigration arise in the area of freedom of speech. For example, in Britain there is a Race Relations Act, and under it, people have been jailed for saying things, like blacks are disproportionately involved in crime, which are actually true. But truth is not a defense. . . .

[T]he major Mexican organization in the U.S. has unblushingly begun a campaign to lobby the major American media to prevent them quoting or featuring immigration critics on the grounds that criticism of immigration is "hate." . . .

But what I would suggest here is that the immigration influx of the late twentieth century into the U.S. and the West in general has been the Viagra of the state.. It has reinvigorated the state, when it was otherwise losing its powers because of the collapse of socialism and the triumph of classical liberalism. . . .

Americans are taught that "Diversity is our strength." But diversity is not strength. It is weakness, for a wide range of reasons.

Although I don’t often say this about libertarians, Peter Brimelow is well worth listening to, and Alien Nation is a must-read.