Up Helly Aa! A Celebration of Fire and Vikings in Shetland 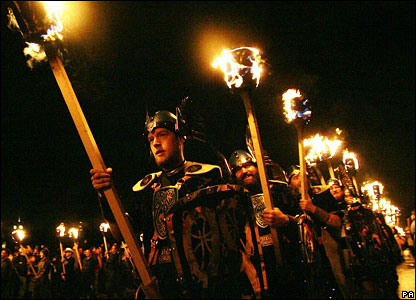 Every mid-winter in the Shetland Islands, the residents celebrate their Nordic heritage (the islands changed hands between the Scots and Vikings for centuries early in the fist half of the last millennium) with a fire festival, commonly called “Up Helly Aa” by the locals. It’s celebrated in just about every Shetland town, including Scalloway, where my wife’s mother was born and her uncle now lives.

The festival — which was first held after the Napoleonic wars — celebrates the end of the “yule season,” and has evolved to include a procession of torch-bearers wearing festive garb. Some wear Viking outfits. Some just wear special T-shirts. And some even dress like a Vegas-era Elvis). A good time is had by all — and good times are valuable in such a harsh climate in winter. At the end of the procession, a painstakingly built replica viking galley in the harbor is set ablaze in a spectacular display. It’s the kind of festival would have a hard time getting off the ground in the United States. You’re going to what? Carry oil-dripping torches? Around children? You’re going to set fire to a wooden ship? In the water? But what about the fish? Do you have a permit for that? I’m calling the EPA … and OSHA!

Anyway, here’s what it looks like when you light a Viking galley ablaze. 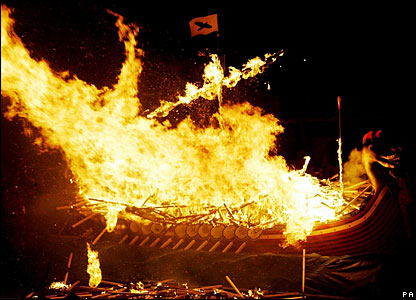 Why am I writing about this? Patience …

Every Up Helly Aa festival has a leader, the Guiser Jarl (pronounced “geyser yawr-el”), who is something like a grand master in an American parade. The Guiser Jarl selects his court, what’s called the Jarl Squad. It is a great honor to be picked for the Jarl Squad. And in Scalloway, one must at a minimum be a resident of the town for at least five years before being picked. Then the Guiser Jarl must like you and award you the honor — at which point you start growing your beard, to the consternation of many a Jarl Squad wife. There are some exceptions, though. And my wife’s brother, Buzz, was one of the exceptions.

My wife and her brother spent many a summer of their youth in Scalloway, and continued to visit Shetland often in their adulthood. Buzz, who lives in Alaska, is a long-time friend of this year’s Guiser Jarl in Scalloway, Michael Pottinger. So he is one of a great minority of Americans tapped to be a member of Scalloway’s Jarl Squad. It was so exceptional, Buzz was featured in a news story about this year’s Up Helly Aa on a Scotland TV station.

(NOTE: The Up Helly Aa in Scalloway was special this year because last year’s was cancelled. Michael Pottinger’s then-one-year-old son took seriously ill and had to be flown to Edinburgh on mainland Scotland for treatment. And the town decided it would be better to not have the festival in 2009 than to pass over Michael’s time as Guiser Jarl).


My brother-in-law, Buzz, comes in on the news-clip video at about the 1:30 mark.

I post this here for posterity, and because I think it’s cool. And because it makes my home-town Tournament of Roses parade seem downright … well … gay. Oh, and that “lucky wee fellow” the Scot news reader mentions at the end of the clip? He’s not referring to Buzz … but to Michael Pottinger’s now-healthy son.

The galley might be authentic, but the participants do take some liberties with their outfits.

My brother-in-law knows well how lucky he is to not just see Up Helly Aa, but participate in the Jarl Squad.

It’s part of my sworn duty as a Viking reenactor to point out that the winged and horned helmets are entirely inauthentic.

But who cares? I don’t think I’m the only reenactor who’s long wished he could be in Shetland for Up Helly Aa, just once.