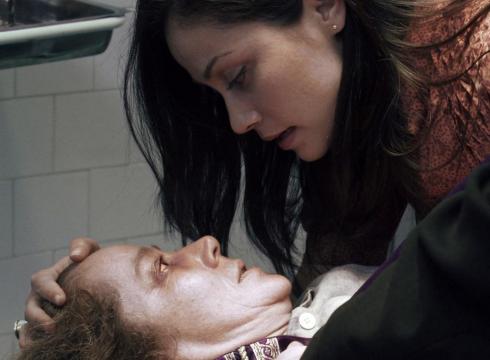 For many decades, including most of the twentieth century, the subjects of demonic possession, exorcism, demonology, and related matters received very little attention in the American society and culture, remaining confined to fringe interests. No more: there has been a profusion of films, novels, and nonfiction books about the subject in recent years.

The latest example of this burgeoning interest is the unexpected first-weekend success of The Devil Inside, a newly released film from Paramount. The Devil Inside brought in $33.7 million in its first weekend, finishing first in U.S. movie ticket sales. This was more than double the amount expected by “even the most optimistic forecasts” from industry insiders, as the Associated Press put it.

These estimates are based on a variety of factors, including the weekend’s overall expected box office take, the appeal of the actors in the particular film, the overall popularity of its broad genre and particular subject matter, what other films are competing with it, and the like. When the forecasts are wrong, the reason is generally traceable to audiences’ unexpected reaction to one or more of these factors. In the present case a likely explanation is that the film’s subject matter proved more interesting to audiences than expected, given the rising popularity of the subject and the probability that industry analysts have yet to see it as an important factor.

Additional evidence that the film’s subject matter (in addition to its being a horror film, a currently popular genre) was a key to its popularity is the fact that critics hated it and even a significant minority of people who paid to see the film reported disliking it. People went to see it even though they were being told by both critics and other moviegoers that it wasn’t very good.

The popular mind tends to link demonic possession with the bestselling book The Exorcist and the 1973 hit movie based on it, but in fact the subject did not take hold as a widespread interest in the United States until the turn of the current century. I imagine that this lack of interest was largely the result of a general lack of belief in devils as described (in not very great profusion or detail) in the Bible—a disbelief encouraged throughout the twentieth century by mainstream Protestant churches and a good deal of the Catholic clergy.

It may be that Blatty’s book and William Friedkin’s scary and grotesque film spurred some Catholic clergy and a few Protestant clerics to become interested in demonology and treatment of the phenomenon known as demonic possession, which then seeped down into their congregations over the course of the subsequent quarter-century so that it became a more pervasive interest of the public since the turn of the twenty-first century. If so, it is a clear case indicating the power of culture. If not, it is a growing cultural phenomenon that should be of great interest in itself.