It is with a heavy heart that I write this review—and there is a high risk that it will turn into a rant. I have genuinely enjoyed the work of Canadian mystery novelist Louise Penny in the past, and I really looked forward to her newest book, The Beautiful Mystery. It had an intriguing plot idea, and with an author as skilled as Penny behind the wheel, I thought there was no possible way for the book to fail.

The Beautiful Mystery takes place in the monastery of Saint-Gilbert-Entre-les-Loups, a reclusive order of monks who have taken a vow of silence. Ironically, despite their vow of silence, the monks have become famous worldwide for their beautiful singing voices, having released a best-selling CD of Gregorian chants. But then, someone at the monastery murders the world-famous choirmaster, and it is up to Chief Inspector Armand Gamache of the Sûreté du Québec to investigate, along with his sidekick Inspector Jean-Guy Beauvoir.

The plot idea is fascinating, and I continue to read books like this with so much hope. I am fascinated by this one question: how can an atmosphere in a monastery or a convent become so poisoned that finally murder occurs? No mystery author seems able to answer that question. For instance, Catherine Aird cops out from this angle in The Religious Body by introducing suspects from the outside. Louise Penny, on the other hand, never even considers an outside culprit… yet the solution manages to be a cop-out nonetheless.

The problem, I suspect, is that it can be very difficult to portray religious people. The author tries but ultimately fails—these characters come across as what the author thinks religious people are like. It seems that Penny is baffled that monks like those of Saint Gilbert would choose to live in a monastery. She finally bails out and tells us that all these monks came to the monastery wounded from the world—because clearly, religious people living with a vow of silence must be insane or running away from something! Clearly they must be delusional people who are running away from their problems by secluding themselves from the rest of the world—it’s not like they can have actual faith or something!

I have met many priests and a few monks in my brief time on this earth, and it’s safe to say that none of them were remotely like these monks.

Not only that, the book has several extremely stupid or naïve comments on religion and its applications in the real world. These reach their climax with a particularly offensive metaphor—the entry to a hidden garden is behind a bookshelf, you see. The author then tells us the books are those of various Christian authors—including C. S. Lewis—and that they are “flung aside” so that you can enter “the real world.” (Because an isolated, walled-in garden used by only three people is the very first thing that comes to mind when I think of “the real world”!)

This is as close a paraphrase as I can get, since I listened to an audiobook copy of this book. But the implication is quite clear—Christian writing is out-of-date and useless and really should be thrown aside for people to participate in the real world. I’m a Catholic myself and although I respect all religious beliefs, I am continually surprised that it’s apparently fine to piss on Christian beliefs as though there were nothing of merit there: such an assumption is not only insulting, it’s pig-ignorant and (there’s no nice way to say it) stupid.

Whether you believe in it or not, there are many fine lessons taught by Christianity, and these deserve to be studied, not “flung aside” like some worthless garbage. Maybe I’m reading too deeply into it, but I doubt it—and if so, Penny’a wording is very poorly chosen in this context. 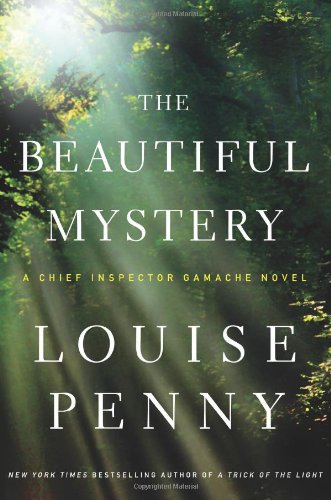 So, with unconvincing religious people and extremely naïve commentary on religion, we are left with some very boring motives for why murder should have happened, and that’s why the solution is so disappointing on that scale. But far more importantly: the ending is ridiculous!!! Say what you will about Penny but in all three of the books I’ve read, she at least played fair with the clues pointing at her killer (though motive could be weak). This book is a complete cheat. The murderer confesses because (wait for it): someone sings a song that the victim was found clutching in his hand! Before the dramatically convenient confession, Gamache has no evidence and no foundation whatsoever for his suspicions—this is a 100 percent cheat, pure and simple, with a boring motive for the murder that simply made me one very cheesed-off reader. The victim’s dying message doesn’t point to his killer at all.

And here’s the worst part: despite the book being a complete, manipulated cheat … the culprit is ridiculously obvious from his first appearance!!!

Oh, but that’s not the best part—midway through the book, a character is introduced who is a complete, grade-A asshole… and he manages to do something very important plot-wise by turning a character completely around. How? Magic, I guess, because there was no reason for this complete about-face in character! The asshole’s words go from not-bothering-me-at-all to Oh-My-God-it-is-haunting-my-every-conscious-moment-and-I-have-no-idea-how-to-stop-it-so-I-guess-Gamache-is-to-blame!!!

This is a spoiler-free review, so I will use a parallel with Othello to sort-of explain what I mean. It’s as though Iago showed Othello a handkerchief and Othello immediately went and killed Desdemona in Act I. The key is this: although Iago manages to bring about Othello’s downfall with nothing but a handkerchief, he makes this possible by first poisoning Othello’s mind…. and besides, Iago was in a position of trust! This Iago is distrusted from moment 1, but he shows nothing but a handkerchief and that’s enough to turn Othello into a monster. It’s ludicrous nonsense.

Overall, The Beautiful Mystery is a dismal failure, and I have decided to keep away from Louise Penny for a while. I don’t know if I’ve changed or if the author has changed, but the series seems to have lost its magic for me. Though the book starts off quite promisingly, after so many cop-outs I just wanted to bludgeon the audiobook reader to death—I no longer remember why I liked the beginning in the first place.

The conclusion is ridiculous, and some of the religious commentary is frankly insulting. The characters and their religion come across as phony, and a major plot-thread is absolute nonsense. If you already like this series, you might enjoy it … but I used to be a big fan and I found myself despising it.

Note: This book makes major references to what I presume must be an earlier entry in the series, something about a factory raid. If this rings a bell for you, that’s the only major spoiler I’ve found. But if you haven’t read such a book yet, it’s best to avoid this book until you have read whatever book is being referenced. Much has happened in this series since The Murder Stone, and if you are a fan this will be spoiled big time.