According to  Reason magazine senior editor Radley Balko in testimony before the U.S. House Subcommittee on Crime on July 2 of this year,

800 times per week in this country, a SWAT team breaks open an American’s door, and invades his home. Few turn up any weapons at all, much less high-power weapons. Less than half end with felony charges for the suspects. And only a small percentage end up doing significant time in prison.

Please bear that in mind as you read the following guest commentary by Steve Stanek, a research fellow of the Heartland Institute.

The points Steve has to make are of immense importance, and I endorse his view here.

A commercial airliner on the taxiway brought back to the hangar and the flight canceled because of six men speaking Arabic – Aug. 29, 2007.

Two people charged with a felony for sprinkling wheat flour on the ground – Aug. 23, 2007.

More than 100 cops backed up by two armored vehicles responding to a suicidal gunman holed up by himself in an apartment – Aug. 8, 2007.

I have been watching with increasing frustration and disbelief the reactions of people who supposedly protect us.

I began paying close attention after the infamous Columbine High School shootings in 1999. Cops stood outside the school for three hours and did nothing to stop the shooting while terrified students and school employees used their cell phones to tell police dispatchers exactly what was happening and where.

I’ll bet those cops could have handed their guns to the parents of nearly any one of those high school students, and those parents would have charged into that school and ended the shooting in about two minutes.

Since then the nation has witnessed umpteen incidents involving cops or airline officials or others who are supposed to safeguard us reacting in over-the-top ways to the mildest of perceived threats or innocent mistakes.

I was a witness to the madness of more than 100 cops and two armored vehicles pouring into a quiet neighborhood, as it happened barely one mile from my house in northeastern Illinois. A 48-year-old man had fired several shots from a handgun while inside his apartment (striking no one). He was upset because he wanted to spend more time with his daughter. The daughter and her mother got out of the apartment and before long the neighborhood was crawling with cops.

Hours later they went into the apartment to find the man dead from a self-inflicted gunshot wound. He apparently had been dead for several hours. 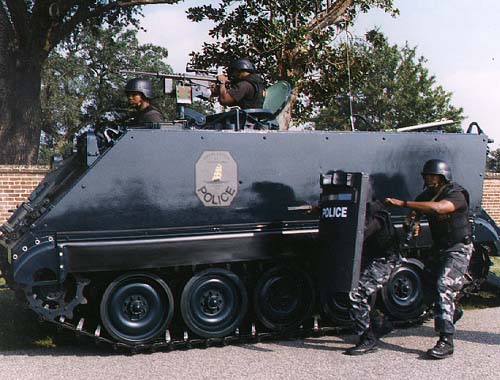 This response indicates to me cowardice . . . and attempts to cow the public. The cops were dressed head to toe in what looked like Kevlar. They looked like something from out of Star Wars. The two armored vehicles were an added touch of intimidation for the scores of neighborhood residents who were screamed at and bullied by cops for daring to venture out of their homes and ask what was happening.

My county apparently has a penchant for police overreaction. Last year, a few miles down the road from my house, a county bomb squad shut down part of a neighborhood and rolled out a bomb-defusing robot after someone reported a suitcase outside his door.

Four hours later police using the bomb-defusing robot determined the suitcase contained fuzzy pink slippers, a purple sleeping bag, and other gear for a girl’s sleepover. The suitcase had been dropped off at the wrong address. The suitcase even had a name tag on it, but apparently the cops were too scared to get close enough to look at it until after disrupting and frightening an entire neighborhood for several hours.

In the last two weeks we have learned about an airline flight from San Diego being canceled because a worried passenger noted to the flight crew six men speaking Arabic. Are we now so paranoid that the mere use of Arabic is enough to ground commercial airliners? Turns out the men had been hired by the U.S. Marine Corps. Considering our military involvement in Arab lands, it’s probably good to have Arabs working with our Marines.

We’ve learned of New Haven, Conn. ophthalmologist Daniel Salchow and his sister Dorothee, visting from Germany, who now face possible prison time and tens of thousands of dollars in penalties for organizing a run for a local chapter of the Hash House Harriers, an international organization that describes itself as “a drinking club with a running problem.”

The Salchows sprinkled flour on the ground to indicate the route of the run. When they went through an Ikea parking lot, someone reported the sprinkling of a powdery substance. Hundreds of people were evacuated from the store, and, in the words of the Associated Press, “The incident prompted a massive response from police in New Haven and surrounding towns.”

Couldn’t someone have asked them what they were doing? The Salchows, who are due in court Sept. 14, now face felony breach of peace charges and the prospect of New Haven officials seeking financial restitution for the city’s “massive response” to a non-existent threat.

And less than one week ago we learned of Police Officer Wendell Adams of Union City, Ga., who arrested Kendra Bull after she served him an overly salty hamburger at a local McDonald’s restaurant, where she has worked only five months. She was arrested after admitting that she had spilled salt on some hamburger meat. Workers knocked off as much salt as they could and cooked the patties, and Officer Adams ate one of them.

Officer Adams said he felt ill after eating the burger (couldn’t he have stopped eating after he noticed it was salty?), and arrested her for serving a meal “without regards to the well-being of anyone who might consume it,” in the words of the police department’s official spokesman.

This is police work? This is protection of the public? More than 100 cops and two armored vehicles to respond to one man holed up in an apartment? A bomb squad to defuse fuzzy pink slippers and a purple sleeping bag?  An airliner grounded because of men speaking Arabic? A girl thrown in jail for accidentally putting too much salt on a meat patty?

Do these reactions inspire confidence in
the courage and judgment of people who are supposed to protect us?

These reactions make me think they are cowards who have abandoned common sense.