Summer has become the main season for cable TV networks to premiere new series and specials, as the broadcast networks give themselves over to reruns and game shows on the assumption that nobody wants to watch television on warm summer nights.

That’s probably a good bet—and certainly a good thing if true—and it has a further benefit in that the cable networks tend to be a little more creative than the broadcast majors in the kinds of series they offer. Chasing a smaller audience allows them to be more adventurous in what they’ll try—and sometimes they succeed. Two good examples are AMC-TV’s Mad Men and TNT’s Saving Grace, both of which premiered in the past few days.

Mad Men, which began last week and runs Wednesday nights on American Movie Classics, was created by a former writer for HBO’s The Sopranos and tells the stories of late 1950s-early ’60s advertising people in New York City, the "mad men" of the title. The program shows a critical time in America’s transition from a morals-based culture to one centering on personal pleasure and fulfillment.

The consumer culture really began at the start of the twentieth century, and was strongly in place by the 1920s. But it was only after World War II that the pursuit of pleasure was openly touted as the purpose behind life in America. The American advertising industry quickly learned to pitch its appeals directly to the sense, bypassing the reasoning process altogether whenever possible, and television made such an approach even more effective than printed media had allowed.

Mad Men depicts this transition vividly, with the people who led these changes placed right at the center of the story. It’s well worth watching, and watching critically. 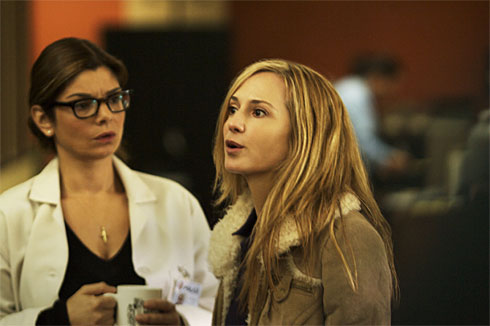 The consequences of the transition from a rule-based society to a pleasure-oriented one are vividly depicted in Saving Grace, which premiered tonight on Turner Network Television. In this program, Holly Hunter gives a superb performance as Grace Hanadarko, a cynical, sensual, tormented Oklahoma City police detective.

Hunter shows an impressive emotional range in this role. Grace drinks too much, sleeps around (presented in extremely vivid detail in the opening episode), flouts authority, uses foul language, and generally acts in a thoroughly trashy way. After killing a pedestrian while driving drunk, however, she sinks to her knees in despair and asks God to help her—not at all sincerely, as she does not believe in God, but desperately and without hope.

God does answer, however, in the form of a disheveled, tobacco-chewing angel named Earl (played by Leon Rippy of HBO’s Deadwood). Grace is understandably appalled and unwilling to believe in this intervention, but her subsequent investigation proves it to be real. Nonetheless, she remains resistant to the angel’s ministrations and wishes only to go on with life pursuing her own will as always. This is both admirably realistic and dramatically smart.

Yet Grace really does want to be good, and Hunter and the show’s other creators depict that struggle admirably, with sympathy, understanding, good sense, and humor. The show is about more than just one woman’s struggle; it depicts the struggles we all go through, to greater or lesser degrees, in a culture that says we can do anything we want while we live in a world where that is anything but true—and wouldn’t be good if it were.

Sam: I was wondering whether you would review Saving Grace and what your opinion would be.
I looked at the show from a few angles (from the couch, from the kitchen grabbing a snack, from the recliner)and generally liked what I saw. For what its worth, I offer a few of my observations.
a. I was pleasantly surprised at the manner in which Christianity and the professed believers in the show were depicted. Holly Hunter’s character has a brother who is a Roman Catholic priest. He was not depicted in the typical Robin Williams-like characterization, but was depicted as a sincere, honest person, who had been trying to push and drag his sister back onto the straight and narrow for a long time, and was therefore having a difficult time believing his sister’s tale about meeting an tobacco-chewing angel by the name of Earl.
Likewise, Laura San Giacomo’s character “Rhetta Rodriguez”, another believer, was also not depicted as the usual whacked-out nut-job.
In addition, the awesome love of God and the incredible Gospel message that He wants to give us a second chance, that death and destruction is His “strange work, …His alien task” (Isaiah 28:21) was repeated in an understated, yet clearly unsubtle manner.
b. Holly Hunter’s “Grace” portrayed a life-like character who struggled with the desire to change her current lifestyle, which left her sad, depressed and unfulfilled, for one that was God-pleasing. When the angel Earl wrapped his wings around her and she felt the love of God, she seemed to really want that for her life, however, the old lifestyle was comfortable and had such a strong hold on her. Grace struggled when faced with the temptations of her old lifestyle, a fair dramatization of St. Paul’s lament in Romans 7:15 “…I do not understand what I do. For what I want to do I do not do, but what I hate I do…”.
d. The plot of the show, unlike the most recent episodes of “Monk”, had a few plot twists and turns. For example, the character of “Leon Cooley” the death row inmate, portrayed by Bokeem Woodbine, who was the man Grace ran down and killed with her car. Depending on the writing of future episodes, the possibility of a little mental stimulation while I am eating my snacks will bring me back at least for a few more shows.