The Very Real Dangers of Race-Baiting 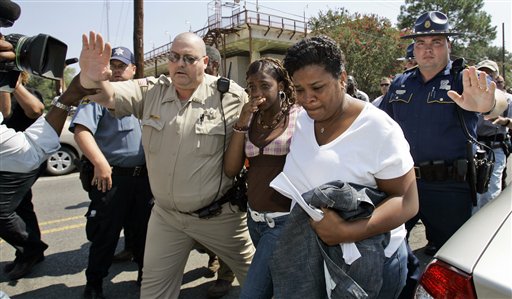 The current race controversy in Jena, Louisiana, is, as is the natural order of things, only being worsened by the invasion of evil nitwits from outside the town attempting to intensify the grievance culture that already oppresses American blacks today.

The facts of the story are fairly simple: the town of Jena has yet to find a way to create some sense of harmony among people of different skin tones in the local high school, and—after a series of unpleasant incidents including the hanging of nooses on a tree (evoking fears of lynchings), the burning down of the school, and a physical assault on a young black man trying to enter a mostly white party—six young men were charged with attempted murder for beating a classmate unconscious and then kicking him repeatedly as he lay helpless on the ground.

The only one of the assailants to stand trial so far was convicted of aggravated second-degree battery and faces up to 22 years in prison, although he is certain to be sentenced to a lot less than that.

What has made this a big story, of course, is that the assailants were black and the victim was white.

Hence, in many people’s eyes the assailants are entirely justified in battering a defenseless and outnumbered schoolboy, and the victim is guilty because people were lynched more than a half-century ago in the American South.

The innumerable gaps in that line of reasoning should be apparent to even the most blinkered of white-haters.

Nonetheless, a number of wealthy race baiters—repugnant characters such as Al Sharpton, the American Civil Liberties Union, and the Southern Poverty Law Center—have descended upon Jena to take political advantage of the self-image of American blacks as being horribly oppressed by whites today and of white guilt over this presumed horrifying reality.

This image of oppression is dead wrong on the facts. This nation has made enormous progress in race relations during the past century, and while there certainly remain jackasses who hate people of other skin tones, such attitudes are roundly despised, and hence it is hardly a social crisis.

What is most important, moreover, is that the United States has almost fully purged race from its laws, and where it remains it is to make things easier for black Americans, not harder.

As a result of this progress in reforming national and state laws over the past half-century or so, black incomes have been on the rise, and have been rising more quickly than those of white Americans.

That is a very good thing, as it means black Americans are catching up to the nation as a whole and will soon no longer be distinguished as being predominantly of lower incomes—if they are allowed and expected to take responsibility for themselves and reap the benefits and risk the dangers of their individual choices.

Race-baiting and white-blaming are thus immensely damaging to the prospects of black people in general to make something of their lives, as it creates a false and enticing excuse for failure.

The most cuting-edge voices among the black community are adamant about not excusing transgressions, regardless of how much some people may wish to justify them.

Bill Cosby, by no means a Republican or political conservative, has come out against the very type of excuse-mongering that the race-baiters’ characterization of the Jena situation exemplifies. The persistence of racism in the United States is very minor compared even to the very recent past (meaning three or four decades ago, a quick blink in terms of our national history), and what remains of it is equally distributed on both sides of the racial divide.

In today’s National Review Online, Thomas Sowell succinctly identifies the intellectual corruption at the heart of the rush to defend the "Jena six":

Liberals’ skills at moral equivalence have been so finely honed during the long years of the Cold War that they have turned this into a case of “unequal treatment,” based on race — as if putting a noose on a tree is equivalent to stomping somebody who is unconscious.

Sowell then astutely points out the natural consequences of this intellectually corrupt position:

The last thing the south needs is a return to lynch-mob justice, whatever the color of whoever is promoting it.

Back in the 1950s, when the federal courts began striking down the Jim Crow laws in the South, one of the rising demands across the country was that the discriminators and segregationists obey “the law of the land.”

But, somewhere along the way, the idea also arose and spread that not everybody was supposed to obey “the law of the land.”

Violations of law by people with approved victim status like minorities, or self-righteous crusaders like environmentalists, were to be met with minimal resistance — if any resistance at all — and any punishment of them beyond a wrist-slap was “over-reacting.”

College campuses became bastions of the new and sanctified mob rule, provided that the mobs are from the list of groups approved as politically correct. Otherwise, even an injudicious remark could bring swift and certain punishment under “speech codes.”

As Dr. Sowell observes, such conditions harm both blacks and whites alike.