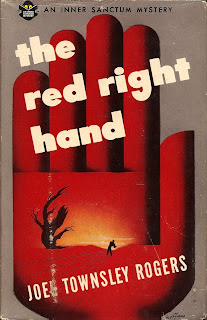 Conflicting opinions about the mystery novel The Red Right Hand find it to be either a classic or a maddening mess. We report, you decide, S. T. Karnick writes.

As regular readers of this publication may know, I have written a couple of times in praise of the 1945 mystery-suspense novel The Red Right Hand, by Joel Townsley Rogers. The book appears to be something of a Rorschach test, however, as readers tend to be intensely divided in their opinions of it. It’s a classic case of people either loving the book or despising it.

I can sympathize with those who dislike the book, as I just don’t "get" some works that others think quite sublime. One of those who doesn’t like The Red Right Hand at all is TAC reader Edmond D. Smith, whose comment on the book is well worth reading as a representative of that view.

I found the book (in no particular order):

and (worst of all)

I understand that the story structure is intentionally (how do we know this, exactly?) unconventional, which is fine if that works. I don’t think it did here. It just felt slap-dash. Maybe Rogers was drinking while he was writing it?

The Riddle character would have worked better if he hadn’t seemed so strange and unstable. I really didn’t have any emotional interest in him. I don’t think that there was a single believable character (with the possible exception of Elinor) in the entire cast of Adams Family wannabees.

And the legendary [denouement] struck me as Rogers being tired of writing the damn thing and wanting to wrap it up in a hurry.  . . .

It strikes me that a hallucinatory story of this nature can only work if the "solution" makes all the "hallucinations" work in a very real way. In this case however, the ending is even more preposterous than the peculiar mystery it attempts to solve.

I realize the genuine acclaim the book has gotten must be based on some quality of excellence. But for the life of me I just don’t get it.

These are critiques others have made of the book as well, so obviously there is something to them. Yet as Edmond Smith notes, the book’s admirers are just as certain that it’s a work of extraordinary power. So, in a response to Edmond’s comment, I tried to elucidate some of the virtues I see in the book:

I think the power of the book for me, and perhaps for other readers, lies in great part in its ability to evoke a strong sense of evil so powerful that it seems to distort the entire universe, making space and time themselves unreliable–and then resolve it and restore things to normal by the workings of simple, humble human goodness.

Clearly you did not get that sense of the book, and that has been the case for some other readers I know, too. That’s why in writing about the book I try to warn people about its unconventionality and help them understand what is to be appreciated about it. Here, for example, are a few things I think the book accomplishes:

Vivid characterizations and dramatic choices–descriptions of people’s clothing, language, and thought processes is particularly smart, in my view

Thematic resonance–themes of doubles, various kinds of perversion, seeming unreliability of time and space, question of free will versus determinism, etc.

A powerful sense of the demonic and its opposite, God’s providence. The former is made manifest in the perversions, the central murders and bizarre characters, the wicked motives, the disorienting disturbances to the fabric of space and time. The latter is made manifest in the continual background thread of love–one character’s love in particular, of course–and the sense of justice and the continual search for it, and in the sense of basic logic and goodness that are disturbed by the very elements noted above as representatives of the demonic.

Emotional power–young marrieds at center of story, aging of Dr. Riddle and waning of his sense of purpose in life, callousness of some characters toward others’ needs, etc.

Powerful sense of justice, awareness that liberty requires human responsibility, and desire to protect the weakest among us.

Those are a few of the things that I, and I believe the book’s other admirers, see in The Red Right Hand.

I hope that these thoughts will help potential readers of The Red Right Hand find it easier to identify what it to be appreciated in the book, should any of you undertake the endeavor. Edmond Smith responded quite generously to my follow-up comment and reiterated what prevents him from enjoying the book.

Thus potential readers of The Red Right Hand are both forewarned and forearmed: you may really enjoy it, or you may not. To do the latter, however, it may well come in handy to be aware of the discussion here and know what the book will and won’t do: it will provide a trip into a uniquely American nightmare and back out, but it won’t satisfy one’s need for realism and characters with whom one can closely identify.

Interesting post. I thought to let you know that you website isn’t getting displayed properly on thunderhawk browser on my mobile phone.
I wish that more and more number of webmasters would reckon the fact that there is an ever growing number of users browsing webpages on the mobile.
Best Wishes

Well, to tell you the truth, John, one of things that turned me off were those very elaborate clues that you seem to like. I think there is a bit of a line between “elaborate” and preposterous and Rogers crossed it, shifted into high gear and didn’t stop until he fell off a cliff.
Clues are only valuable to the extent that a reasonably bright, sane reader might stand a chance of seeing rational meaning in them. There is just no way that the “elaborate” clues supplied could possibly lead any such reader to figure out the MacCamerou, uncle/nephew, wig, old man/younger man hokum (to just pick one of many bits of humbuggery at random). The solution simply lacks any bit of believability. Rogers might just as well have thrown spontaneous human combustion or teleportation into the mix as well. Why not? The “solution” isn’t constrained by the rules of logic so, hey, let’er rip. Anything goes.
I think that’s what irritated me so much about the ending. It felt like a cheat. As I read Right Hand I was trying to figure the puzzle out rationally figuring that Rogers was playing by the rules…but he’d set the rule book on fire before he even sat down to type the first page.
I will give him credit for one thing, however: having written a book that has elicited this much commentary. It may be a classic or it may be birdcage liner but damn it makes for some interesting conversation.

Those are very good points about the book, John. Thanks.

I’m just happy that TRRH is still being read and argued about in the 21st century! My own two cents: Literature it’s not, yet it boasts one of the most elaborately clued solutions ever written and is thus a Golden Age classic. Moreover, Dr. Riddle appears to be a unreliable narrator but . . . well, I don’t want to spoil it. A brilliant double-reverse fake!

I like the way you express that, Martin. Quite agree with your assessment.
I’m so glad that you could stop by for a visit.
Readers: Martin Edwards is a highly accomplished British writer of crime fiction (example here) and an astute critic of the form. His contributions to the Forgotten Books series of items on Patti Abbott’s blog, available also at Martin’s own blog, are an excellent resource of information about worthy mysteries that merit renewed attention.
Interesting side note: several of Martin’s book titles are allusions to 1960s rock songs. My favorite: Waterloo Sunset.

This is a good explanation of the pros and cons. I’m definitely a fan of this book. You couldn’t do it twice, and get away with it, but I’m glad Rogers did it once.

Will do, Ed. Thanks.

Make it Ed. Edmond is my by-line name.

Thanks, Edmond. I appreciate your thoughts on the book. I think that this has been a very productive discussion.

A perfect summation of and forewarning for an obviously controversial book!