The Light in “Dark” Fiction

"Dark" fiction can have highly positive values behind it, writes S. T. Karnick. From the Feb. 25 issue of National Review.

ONCE the Sixties generation began its Long March through the institutions, conservatives started to despair of ever being able to counter what they saw as the uniform degradation of American culture. In the past couple of decades, however, more and more critics on the right have looked past the surfaces of seemingly antinomian and relativistic popular art and found serious and often positive meanings in it.

One such writer is Thomas Hibbs, a Baylor University professor of ethics and culture, film critic for National Review Online, and author of Shows About Nothing, a 1999 study in which he found Nietzscheanism to be rampant in American pop culture. In Arts of Darkness, Hibbs examines the distinctively American popular art form known as noir.

The term "noir" was first applied to a group of taut, tense, and often bleak crime films of the 1940s. Movies such as The Maltese Falcon, The Postman Always Rings Twice, Out of the Past, and The Killers merged arty techniques derived from German Expressionism with conventional, gritty, strongly American story lines stemming from the hardboiled detective novels of the 1930s.

The films featured astonishingly cynical characters, commonly motivated by greed, sexual desire, envy, revenge, and other generally unwholesome impulses. American society, in these films, is consistently corrupt under a facade of respectability: People in power routinely exploit others simply to gain more power, and protagonists become increasingly enmeshed in a trap they cannot escape. A sense of dread and fatalism is omnipresent.

These movies brought a new level of cynicism to American popular culture, reflecting a society jaded by a long economic depression and horrific war. Since their era, as a result, "noir" has come to describe not a genre or style but really an attitude, even a philosophy: a perspective that has persisted in American culture in a variety of media and genres. (Although Hibbs does not mention it, there was a long tradition of "dark" fiction in American literature before the 1940s–e.g., Melville’s The Confidence-Man and Moby-Dick, Mark Twain’s later works, and Hawthorne’s novels and stories.)

Hibbs writes that although noir seems bleak and cynical on the surface, the meaning behind the phenomenon is a good deal more complex and significantly more positive: "What is significant about these films is not just that they present a dark and dismal world but that they display their main characters as on a quest for love, truth, justice, and even redemption."

What interests Hibbs is "the convergence of noir with the religious quest": Noir arises from the same impulses that prompted Pascal to write of the hiddenness of God, and of the faithful believer who seeks "with groans."

Hibbs sees noir as engaging and critiquing the two major philosophical dangers of modernity: nihilism and Gnosticism. He writes: "Enlightenment theorists promise liberation from various types of external authority: familial, religious, and political. But an unintended consequence of the implementation of Enlightenment theories is the elimination of freedom." The film noir vividly expresses this truth, as the protagonists find themselves ever more deeply enmeshed in the complex, bureaucratized, soulless modern cities and webs of uncaring institutions that are the consequence of the Enlightenment passion for controlling the world through science.

In portraying the tragic limitations of the Enlightenment project, Hibbs argues, noir shows liberal modernity as "a potential source of nihilism, a human existence devoid of any ultimate purpose or fundamental meaning, where the great tasks of inquiry and the animating quests that inspired humanity in previous ages cease to register in the human soul," a place where the very notion of a soul is suspect.

The problem of the soul, Hibbs notes, is a central concern of sci-fi noir, a subgenre that includes some of the most popular films of the past quarter century: the Terminator series, Blade Runner, Dark City, Minority Report, and the Matrix series. These films often center on the difficulty of knowing whether an entity is a human or a machine, and flirt with the mechanistic notion that human beings are nothing more than material objects, and thus lack free will.

Hibbs faults sci-fi noir for evincing a Gnostic desire to escape the limitations of the body, but the films actually fit his overall thesis better than he realizes. For example, the goal of the central characters in the Matrix series–which he criticizes as Gnostic–is to free people’s bodies from the alternative-reality Matrix, where they are used as power sources for machines.

Given that the trapped individuals experience a reality all but indistinguishable from physical reality, there is no reason to free them other than to allow them to use their bodies and thus be complete human beings. 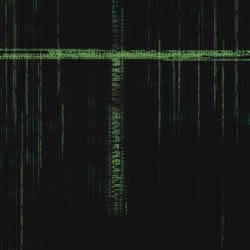 (In addition, the Matrix trilogy is, like most sci-fi noir, suffused with Christian imagery–suggesting the real alternative to nihilism and Gnosticism.)

Hibbs writes that the TV series Buffy the Vampire Slayer "depicts its characters struggling to recover a lost code of good and evil and longing for a kind of redemption." Like classic film noir, Buffy demonstrates a conservative respect for the limits of human aspiration and warns of "the dangers of transgressing boundaries"; it "repeatedly affirms a clear structure to the cosmos, a sense of boundaries that cannot be crossed without dire consequences."

Some neo-noir films, Hibbs argues, have a different agenda: the "elevation of the anti-hero who stands beyond good and evil." He points to Nietzschean supermen such as the shadowy crime lord in The Usual Suspects, and claims that the power of these super-antiheroes "effectively makes the existence of a loving God irrelevant to human life" and thus makes the films fully nihilistic.

But Hibbs notes the philosophical impossibility of absolute evil, and the fact that evil is parasitic upon good and points us toward it. Noir, Hibbs writes, "jar[s] us into realizations about how disordered our condition is; it brings us face to face with ourselves and our wretched alienation." Paradoxically, by identifying the danger of nihilism, noir helps us avoid it: "However much noir may flirt with or engage the possibility of nihilism, it typically resists succumbing to it. Noir persists in depicting the human longing for love, for truth, and for communication as noble and admirable, as constitutive of what it means to be human."

That is the enduring power of noir. It shows us the abyss–and reminds us that we can still turn back.

I have not read the book, and I certainly don’t share the politics of the author, his reading of history, or his religious affiliations, but from what I have read here, it offers a novel perspective on film noir, which resonates with ideas I have put forward elsewhere about redemption versus nihilism, though my conception of redemption has a humanist if not spiritual stamp.

Thanks very much for this introduction to the subject. It mentions some of my favorite ‘dark’ films (Dark City; Blade Runner) while mirroring many of my own feelings about the ‘redemption’ theme that runs through so many contemporary noir movies.

“The film noir vividly expresses this truth, as the protagonists find themselves ever more deeply enmeshed in the complex, bureaucratized, soulless modern cities and webs of uncaring institutions that are the consequence of the Enlightenment passion for controlling the world through science.”
Thanks for the great review. I’m a big fan of Noir and have always enjoyed the complexity
and ambiguity that are its hallmark. I’ve always found Noir to be so much richer than more “modern” forms which too often hit the Nihilism but go no further. Empty cynicism is uninstructive and frankly tiresome, mere attitude and posturing.
I’m currently reading Jonah Goldbergs’ Liberal Fascism but hadn’t thought of the connection between fascism and Noir until reading your post, especially the quote above. It sounds like the two books thematically dovetail and I’m putting Arts of Darkness: American Noir and the Quest for Redemption high on my reading list.