‘The Hobbit: An Unexpected Journey’ is Good, but Disappoints 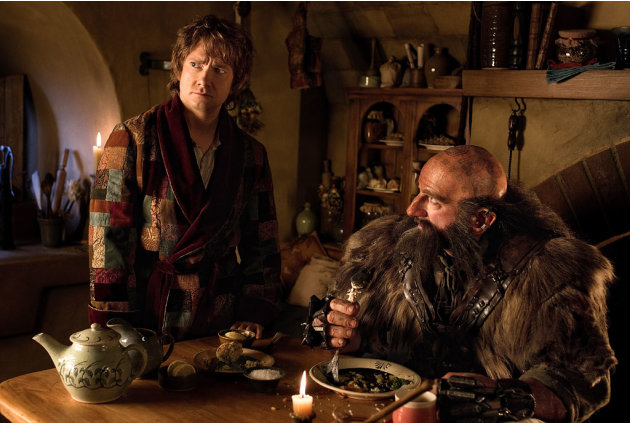 So I finally saw The Hobbit: An Unexpected Journey. And I enjoyed it. And yet… I understand why some people were disappointed. I suppose I was a little disappointed myself, though that shouldn’t be taken as a thumbs down.

First of all, the good parts. Martin Freeman is a wonderful, wonderful Bilbo Baggins. I can’t imagine how the role could have been better played. Superb casting, superb job.

I liked the visuals. Some people, or so I’ve read, have trouble with the unusually high speed at which the film was shot, but it didn’t bother me at all. I saw it in 3D, and I liked that too. There were some wonderful color effects. One of my major take-aways from the whole thing was just how lovely it looked.

My reservations are complicated, and I suppose I’m still thinking it out. A lot of material has been added, in order to grow the original story, which is a pretty quick read, into a twin to The Lord of the Rings. Much of this ought to be legitimate enough for the most exacting Tolkien fan. Instead of taking things out of the story, as they had to do with the first trilogy, Jackson and people put stuff in, and the most substantial of the additions come (or so I’m told, I’ve only actually read The Silmarillion) from Tolkien’s own writings about Middle Earth.

The additions that actually bothered me (a bit) were the action additions. Every scrape and danger in the book becomes a huge, epic extravaganza, with lots of CG-whiz. The first trilogy pushed the line in this regard; it seems to me this movie crosses it. You’ve got a company of 14 here, and the idea that they could all survive all these cataclysms and near misses passes credibility. The fact that you can show something doesn’t mean you should. I think they might have restrained themselves a bit. The movie is three hours long. It didn’t really need to be.

The heart of my problem, I guess, the reason why I left the theater just a tiny bit unsatisfied, was that the experience of the movie was so different from the experience of the book. Whatever you can say in objection to the first trilogy, it always (or it did for me) achieved the same emotional impact as the novels. This Hobbit film, though very good in its way, is a somewhat different animal from the book it’s based on. Perhaps I’ll come to appreciate that when I’ve seen all three films (and you may be sure I plan to).

My intention here is not to write a negative review. I endorse The Hobbit: An Unexpected Journey. I liked it very much, and there were parts I loved. Go see it.

Lars Walker is the author of several published fantasy novels, the latest of which is Troll Valley.