Edward D. Hoch is one of the very greatest living mystery writers.

Of course, you’ve probably never heard of him.

That’s primarily because nobody pays much attention to short stories these days. Hoch, born in 1930 and still writing today, works almost exclusively in the short story, and has written only a couple of novels, many years ago. He has published a short story in each issue of Ellery Queen’s Mystery Magazine for the past four decades or so. He has written nearly a thousand mystery stories, and they are of astonishingly high qualitym, especially in light of the quantity he has written.

He was awarded the title of Grand Master by the Mystery Writers of America a few years ago, and fully deserves the honor.

Hoch creates true puzzle mysteries, but they are not without nice character touches. He has created several very interesting detective characters, including Nick Velvet, who for a flat fee will steal anything, as long as it’s entirely worthless (and solves crimes in the course of his work); Simon Ark, who is at least two millennia old and walks the earth searching for true, supernatural evil; Ben Snow, an Old West former gunslinger who now uses his mind to solve crimes (and might just be Jesse James); Michael Vlados, a Gypsy king who solves crimes affecting his community; Capt. Leopold (the model for TV’s Stuart McMillan of McMillan and Wife); Jeffrey Rand, a spymaster; and Alexander Swift, a Revolutionary War veteran who solves crimes in the first years of the United States.

And that’s just scratching the surface of the detectives created by this extraordinarily
gifted and fecund writer.

One of Hoch’s best and most beloved detective characters is Dr. Sam Hawthorne, an avuncular general practitioner in 1920s-1940s New England. Each Dr. Hawthorne story involves a seemingly impossible crime, such as a carriage entering a covered bridge and dissappearing, a barnstormer stabbed in the locked cockpit of his plane while in midair, or the classic case of a murder taking place in a locked room with only the victim inside. Hoch works innovative variations on these situations, and Dr. Sam’s calm, confident, intrepid demeanor fits the atmosphere perfectly. 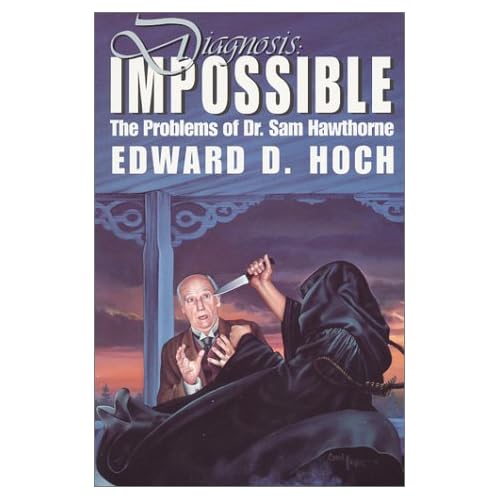 Hoch has written dozens of Sam Hawthorne mysteries, and someone really should snap them up and make a TV series out of them.

I enthusiastically recommend the Dr. Sam Hawthorne mysteries and Hoch’s other series.

For a detailed look at the Dr. Sam Hawthorne mysteries, the first couple-dozen of which the mystery short story publisher Crippen and Landru has published in two excellent volumes, I’ll post a pair of excellent reviews by our correspondent Mike Tooney, the first of which will appear just below this article.

In the meantime, buy the two Dr. Sam Hawthorne volumes and the other great Edward D. Hoch mystery series available from Crippen and Landru. They are absolutely worth it.

Thanks, Mike, and of course thanks for your terrific, detailed summaries of the two books.
I have on my shelves a copy of The Fellowship of the Hand, which I imagine is the other novel to which you refer—but I haven’t read it yet.

Dear S. T.:
Good summary article on Hoch, a greatly underappreciated writing talent.
THE TRANSVECTION MACHINE was indeed “a sci-fi thing” (one of at least two novels by Hoch using the same characters and situations). It may be that Hoch was trying to get ahead of the curve back in the seventies by hybridizing SF with hard-boiled ‘tec fiction. I read TRANSVECTION and enjoyed it, but it really wasn’t anything to write home about; of course, you may wish, upon reading it, to demur. Even substandard Hoch is above standard for many writers.
Best regards,
Mike Tooney

It is one of his novels, Joe, and I think it’s actually a sci-fi thing. Maybe you’ll have better luck with Interlibrary Loan.

S.T., I was searching the local library catalogs for any books by Mr. Hoch and the only book I found by him was one entitled the The Transvection Machine. Is this one of his novels and how is it?