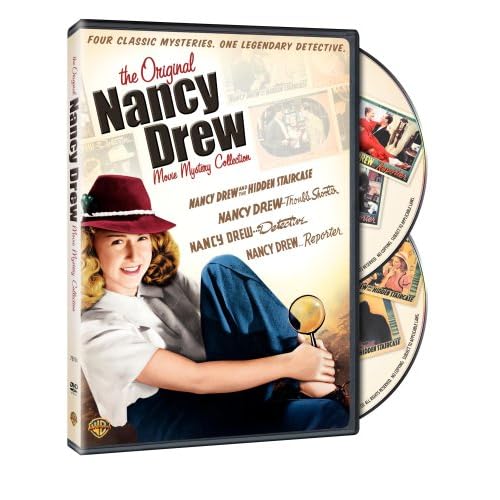 Our friend Mike Tooney called our attention to the following passage in William K. Everson’s book The Detective in Film in which the author discusses the four 1930s Nancy Drew films produced by Warner Brothers and starring Bonita Granville as the title character. It’s a good capsule description of the series:

Perhaps the most striking generation and sex gap in the ‘B’ detective mysteries of the thirties took place in Warner’s Nancy Drew series. Drew senior, played by John Litel, was a lawyer rather than a detective, but was frequently drawn somewhat unwillingly into an investigative role because of close friends with murder raps hanging over them.

Teenage daughter Nancy (eighteen in the books but played as closer to fifteen in the movies by a bouncy and effervescent Bonita Granville) follows the Philo Vance route by never accepting official parental or police verdicts–and, of course, is ultimately proven correct. Her harrowing escapades–including the unearthing of a body in a field, being pursued by a killer through a secret passageway, and being set adrift in a pilotless plane–seem to leave her with no traumas whatsoever. The four Nancy Drew mysteries were all directed by William Clemens and scripted by Kenneth Gamet, based with reasonable accuracy on a quartet from the endless supply of books by Carolyn Keene.

For films designed mainly for juvenile audiences, they were astonishingly noncondescending. The thrills were all genuine, even if punctuated with a certain amount of comedy relief, and the plots and villains were quite strong enough to stand up to adult scrutiny.

Solid if not outstanding in production values (the small-town setting was not too demanding in that respect), the films were also surprisingly long for ‘B’ pictures, some even running as much as eight reels, so that the plots did have time to develop neatly and not be rushed into a five-reel comic-strip format. Expert little films in their way and quite unappreciated in the thirties (when juvenile audiences had an abundance of riches at the movies), they could help to fill part of the gaping void in contemporary films for youngsters were they to be reissued. NANCY DREW, TROUBLE SHOOTER (the one in which the body is dug up in the cabbage fiel d!) was probably the best of this enjoyable series. (pages 136-137)

Everson is right in his assessment that the films are highly enjoyable, and I would add that they espouse sound values. Those traits are much scarcer in our culture today.

In an earlier entry I described Bonita Granville’s Nancy Drew as bristly and self-assertive, which she certainly is, but I should also point out that she portrays Nancy as perky and charmingly cheerful through all the danger and mayhem. Those are important qualities of the character.

Turner Classic Movies shows these movies commercial-free every so often. Check the TCM website to receive an email reminder when they are being shown, or just go ahead and buy them on DVD here. At only $19.99 with free shipping, for four films, it’s a very good investment.