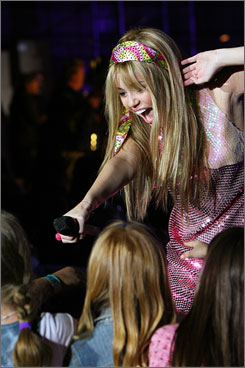 Everyone in America either watched the Super Bowl or went to the Miley Cyrus movie last weekend, as wholesome entertainment triumphed both on television and in theaters.

The Super Bowl was the most-watched ever and the second-highest rated program of all time (behind the M*A*S*H finale), with a record average audience of 97.5 million people. During the last hour, the total climbed to 103.3 million. An estimated 143.3 million people watched at least part of the game.

Predictably, the fairer sex ruled at the movie box office. Hannah Montana & Miley Cyris: Best of Both Worlds Concert finished at the top of the heap, with a very healthy take of $29 million in U.S. theatrical ticket sales. The film did so well that the distributor has decided to hold it over beyond its planned one-week run.

The rest of the top five were The Eye, 27 Dresses, Juno, and Meet the Spartans. Films with male stars or masculine appeal didn’t do nearly so well. Rambo dropped to number six, The Bucket List was seventh, and Cloverfield fell to the ninth slot.

All in all, it was a weekend of basically wholesome entertainment. And a darn great Super Bowl.

The ‘Hannah Montana & Miley’ film is well worth the praise that it’s been receiving. It’s ideal for all ages, and frankly, Miley has a fantastic singing voice (and a ton of potential ahead of her)

Joe, you have my condolences.
But I just hate the Patriots.

“a darn good Super Bowl”
S.T., me & the portion of the audience from New England would beg to differ from that statement! To me, it ranked right up there with Game 6 of the ’86 World Series.

Thanks for pointing that out, Dean. It dropped out when I was doing some work on the site. I have restored it, and it should be working fine now. Please let me know if you should encounter any further difficulties.

S.T.
I wanted to send you an email, but it looks like the email info on the top of this site is gone.
Did I just miss it?