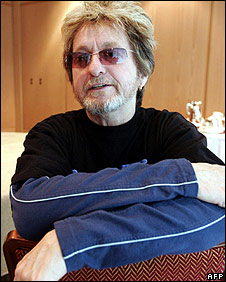 British TV host and journalist Jeremy Clarkson says cover bands could be a great solution to the dire and increasing problem of our favorite rock stars aging and leaving the scene. Is it time for classic rock to go the way of classical music?

Top Gear TV host and all-round curmudgeon Jeremy Clarkson asks an important question in his most recent Times of London column: How will we be able to enjoy live music when all the great rock stars die off or are incapacitated. The Who without Entwhistle and Moon are just not the Who, Clarkson notes, and now we know the real Pink Floyd will never be able to reunite, after the death of keyboardist Rick Wright.

That’s about as depressing as can be for fusty, aging rock and roll addicts such as Clarkson, especially those who heroically refuse to enjoy anything released after 1980. Clarkson notes:

My wife insists that there is plenty of fresh talent coming along to replace the dinosaurs. She is wrong. The Franz Flighters, Car-sick Steve and the Frascatis are derivative and hopeless and I do not wish to listen to any of the noises they make.

I certainly wouldn’t pay even so much as one penny to see the Red Hot Chili Peppers, who, so far as I’m concerned, could not make a worse sound if they spent an hour attacking giant sheets of polystyrene with a flock of electrocuted cats. I hate them.

Instead, Clarkson wants to keep listening to his old favorites, as a great many people are quite content to do, but worries that he may well have seen his most revered bands in concert for the last time. No more, he fears, will he be able to see Genesis, Yes, Pink Floyd, Stevie Winwood, Eric Clapton, Supertramp, and Bad Company performing all their greatest hits live—pot bellies, balding pates, ragged voices, and all.

But there is a possible solution, Clarkson notes: tribute bands. Sure, he acknowledges, they have a bad reputation as inauthentic, poor substitutes for the real, now-doddering original band members, but we should give them a chance.

Actually, in the area of progressive rock—which Clarkson justly admires and enjoys—tribute bands have had a fairly good reputation in the past decade or so, with some achieving real audience success and going on to record original material.

In fact, in Yes’s upcoming tour of the United States, longtime members Chris Squire, Steve Howe, and Alan White will be performing with keyboardist Oliver Wakeman—longtime Yes-man Rick Wakeman’s son—and vocalist Benoit David, who is from a Yes tribute band, now temporarily replacing Jon Anderson in the actual Yes band as the latter recovers from a respiratory illness.

As always, the proggers lead the way into the realms of reason and beauty. Clarkson points out that there is in fact a long tradition of listening to tribute bands—classical music:

When elderly people go to see Rachmaninov’s Third, no one is ever disappointed to find that it isn’t actually the man himself on the ivories. Indeed, many derive a great deal of pleasure in hearing how other musicians interpret the great man’s work.

In fact, when you stop and think about it, the London Symphony Orchestra is a tribute band. It simply turns up and plays music written by someone else.

So why can’t we encourage this sort of thing among today’s youngsters who wish to forge a career in the world of rock’n’roll? Instead of asking them to write their own material, which will be rubbish, we should ask them to interpret work by the masters: Camel, Gong and so on.

That’s a pretty reasonable argument, in my view. In fact, Clarkson notes, support for tribute bands could help create real music traditions from the works of popular artists:

At present, tribute bands try to reproduce exactly what their heroes did. Some are astonishingly good. I once saw a Floyd tribute band in Alaska who were semitone-perfect.

But why can’t they experiment? Try to improve on the original? As we saw when Gary Jules rejigged the Tears for Fears song Mad World, a modern twist can be extremely enjoyable and successful.

Clarkson’s right; this not only will happen, it already is happening, as I noted earlier. And I believe it is a very good thing indeed. Let us let a thousand musical flowers bloom.

Those who enjoy The Franz Flighters, Car-sick Steve, and the Frascatis should continue to do so, and those who want to hear pitch-perfect renditions of In the Court of the Crimson King, Close to the Edge, Brain Salad Surgery, Selling England by the Pound, The Power and the Glory, and The Snow Goose, and who look forward to original works in the same vein, should be perfectly free to do so as well.

What’s your opinion? Would you like to see an excellent tribute band, see only contemporary acts, or just stay the heck away from concerts altogether? Comments welcome.

I’m an old guy–grew up in the ’60s listening to Dylan, the Beatles, the Stones, the Mamas and the Papas. So it should come as no surprise that the current music scene is not my cuppa.
Actually, except for a few groups like Lynnyrd Skynnrd, I pretty much stopped listening to rock in the 1970s. Most of my CD collection now is classical. There are some CDs by old rock bands like Cream and Crosby, Stills and Nash, a little jazz, a little folk. The last new group contemporary music group that really impressed me was Nickel Creek. I think Nickel Creek’s music might have been popular back in the ’60s. Each man to his own prejudice.
I’m always open to hearing about new groups, rock and otherwise, but nothing has stirred me in a long while, though some of my younger friends have tried.
A long time ago, back in the ’50s I believe, there was a song that included these lyrics:[

]
I don’t know about that. In my view, rock and roll is over.
Bob