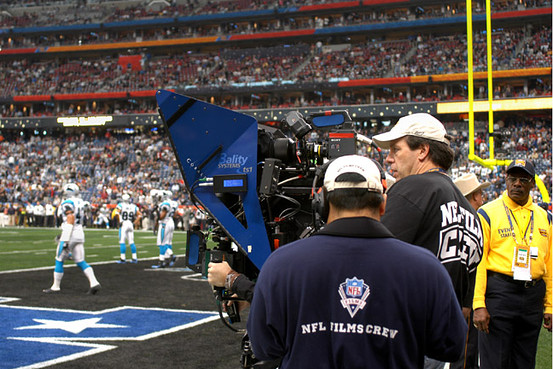 Don’t look for it in the home any time soon, but entertainment providers are experimenting with live 3-D presentations—in movie theaters.

The National Football League and Fox Sports have announced separate plans to provide live event coverage in 3D in U.S. movie theaters in the coming weeks. The NFL will broadcast tomorrow night’s game between the San Diego Chargers and Oakland Raiders live in three theaters in San Diego, New York City, and Boston.

As with nearly all 3D showings, viewing will require the wearing of special glasses.

The broadcast is just the first step on what the Wall Street Journal describes as being "likely a long road to any regular 3D broadcasts of football games."

Fox Sports has announced what may turn out to be a slightly more ambitious plan to telecast the college football BCS championship game at the Consumer Electronics Show and select theaters live on January 8.

The NFL’s Dec. 4 theater telecasts will be invitation-only, and the demonstration will also include television displays showing how the broadcasts would look in the home.

"When Sandy Climan, 3ality’s chief executive officer, shows the footage, "people crouch down to catch the ball," he says. "It’s as if the ball is coming into your arms."

However, it figures to be quite some time before broadcasts of 3D TV reach home sets, and not only because it would take time for the technology to reach consumers. According to Variety, Fox Sports TV Group chairman-CEO David Hill, described in the story as a longtime 3D enthusiast, told the press at a session at the 3D Entertainment Summit yesterday that there will have to be some financial incentive for broadcasters to move ahead with the process. The move to HD TV, he noted, didn’t bring broadcasters new money while costing them plenty:

"I hope the TV industry doesn’t get conned again the way we did with HD," Hill said. "And we got conned. It cost us a fortune to go to HD, but do we get a penny more from the advertisers? Do we get an extra rating point? No. Everybody benefited but the broadcasters."

Speaking just feet from a room full of 3-D televisions aimed at the home market, Hill said that while sports look like the killer app for 3-D TV, broadcasters aren’t interested in footing the bill.

"For 3-D to become impactful in the homes of the world, the people that make money are going to have to subsidize it," Hill said, referring to the TV set makers, who would benefit from selling another round of TV upgrades to consumers.

Hill’s point is well taken—HD happened because the government forced broadcasters to move to digital TV. Short of another such mandate or a new revenue stream, 3D won’t be coming to the home soon.