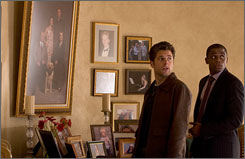 The USA Network mystery-comedy series Monk and Psych are both entering the season’s stretch run, with their penultimate episodes appearing tonight beginning at 9 EST. The season finales will premiere next week.

In my earlier comments on Psych on this site, I observed that the show was trying too hard to be quirky, and I pointed out that "the best thing about a mystery is the mystery." It seems that the producers discovered this timeless truth in the course of the season. The final episode of the first half of the season, which premiered last August, included a solid mystery and incorporated the central characters’ eccentricities into the story, instead of trying to do it the other way round (which never works). (See my review here.) The producers have continued this approach in the second half of the season.

It is important, however, to acknowledge that the best mystery stories don’t just have interesting puzzles, characters, conflicts, and social implications. They also have very interesting detectives.

Xavier Lechard, a French mystery aficionado, astutely observed that "the most famous and enduring detectives tend to be also the most colorful." (His comment appeared on the Golden Age of Detection email discussion list.)

It’s not enough for the ‘tec to be colorful, of course, but without such a character at the center of the story, even the most intellectually challenging mystery can become something of a bore.

What makes Monk and Psych work so well is that they have both interesting detectives and good mysteries.