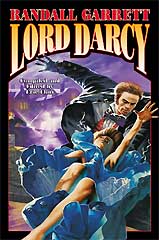 I have some good news for you regarding Randall Garrett’s Lord Darcy mysteries, which I highly recommend for a bit of fun and somewhat meaningful reading—see article here and excerpts from that article below. The good news is that two complete Lord Darcy stories (novellas, really) are available online, at the site for Baen Books, the publisher of the Lord Darcy omnibus collection.

The Darcy mysteries were written in the 1960s and ’70s and are set in an alternative twentieth century in which the Reformation never happened, the rules of magic were discovered during the Middle Ages, and technology has not advanced beyond the mid-nineteenth century. The stories (and one novel) combine dashing adventure, real fair-play puzzle mysteries, a world where magic is real but bound by definite rules, and some lightly presented insights into the human condition.

To read the stories on the Baen website, click here. Once you read them, you will want to read them all.

For more info on Lord Darcy and why you might want to read Randall Garrett’s delightful series, click here for my National Review Online essay on the subject.

To buy a copy of the trade paperback edition, click here.

Here’s some more info on Lord Darcy, from my National Review Online essay on the series:

First published in science-fiction magazines in the 1960s and ’70s, the stories tell the exploits of Lord Darcy, a detective who bears a striking resemblance to Sherlock Holmes.

But if Darcy seems familiar, the world in which he lives is anything but. In this alternative universe, King Richard the Lion-Hearted did not die young, having narrowly escaped death at the Siege of Chaluz (the source of his demise in our world), and that particular event changed everything. The brash, irresponsible king’s brush with mortality sobered him up greatly, and he ruled wisely and well for another two decades and ensured the continuation of a long line of great Plantagenet rulers that has lasted to the present day.

As a result, there was no break between England and France, no Reformation, no formal separation of church and state, and no Enlightenment. The world has thereby avoided the splintering of authority that has characterized the modern era. In addition, rather than the laws of science and technology being worked out into their now-familiar profusion, the laws of magic were developed instead, thereby retarding technological development by making the need for it less urgent.

The resulting world is certainly an enchanting place. In the 1960s and ’70s, travel is still mainly by horseback and railroad, and the streets and buildings are illuminated by gaslight. Houses, furnishings, and clothing fashions have an 18th-century quality, and the feudal system is in full flower and is administered in a quite decent and humane manner, thanks to the precedent established by King Richard. The Anglo-French Empire is a place of great courtesy and formality, a huge contrast to the real 1960s and ’70s in which these stories first appeared.

Even a largely just and harmonious political order, however, cannot nullify the human heart’s propensity toward sin. That, of course, is where Lord Darcy comes in. In this alternative twentieth-century Europe, he serves as Chief Criminal Investigator for Richard, Duke of Normandy, brother of King John IV, Emperor of England, France, Scotland, Ireland, New England (North America), and New France (South America). Assisted by forensic expert and Master Sorcerer Sean O Lochlainn, Darcy investigates crimes, all of which involve some use of magic either in the commission or investigation.

Despite the presence of magic, the puzzles are fairly clued; once Garrett establishes the rules of magic, he sticks to them, and we can trust that all the evidence will be laid before the reader before Darcy presents his ingenious solution. The puzzles are quite good, in fact, which is particularly remarkable in that Garrett was mainly a science-fiction writer (and a widely admired one). Darcy uses deduction to solve the crimes, while Sean serves the function of a forensic scientist. The saga consists of three novellas written in the 1960s, six from the 1970s, and the 1966 novel Too Many Magicians. After Garrett’s untimely death, sci-fi and mystery writer Michael Kurland wrote two more Darcy novels in the late 1980s.

Garrett’s writing style is as elegant and charming as his setting, and his mastery of atmosphere is admirable. . . .

There’s much more—the rest of the essay continues here.

Well, I have to say you’ve got good taste in fiction.
I only read Lord Darcy for the first time at the tail end of last summer, as I was getting ready for the new semester at college. I’d first heard about it from my father, thouh only iin very vague terms — basically just “alternate universe where magic is used to solve crimes.” Years later, following some “you’d probably like this links” on Amazon, I came across a book that sounded good. Noticing it was a Baen book, I immediately switched over to Baen.com to read the sample chapters.
The first story blew me away. It not only sounded like the story my father had alluded to years before but couldn’t remember the title of, it was also a fantasy story with a strong base in Roman Catholicsm. (I later found out that Randall Garrett was actually a member of the Old Catholic Church, but it doesn’t change the way the world he created is structured.) I was surprised that my father, being a diehard and vocal atheist, liked it so much. As a strong Roman Catholic myself, I’d like the Lord Darcy stories just for that.
But, of course, that isn’t the only reason I like the story. Going into the story “cold” (with no knowledge of the story except what was on the pages, both expressly stated and what I could figure out myself), I came up with almost exactly what you described in your NRO article. That is, I saw a well-organized world without the modern mess, with paralells to our world but still obviously unique. It was like Garrett had discovered, not created — the same feel from all great stories. True “sub-creation,” as Tolkein called it.
There is something objective about it that speaks to us. It is a world where life can still be seen in white and black without losing sight of humanity. It is a country where one can excell at one’s task, and find happiness as a person among people, rather than a simple individual in society. It is a world that almost audibly says “this is how it should have been.”
Currently, I’m writing a term paper on the Lord Darcy stories — for a history credit, no less; and whle the class is cross-listed with English Lit, Lord Darcy is not directly connected with anything we are studying. However, my professor (Dr. Schwartz) was so intrigued by my description of the series that he suggested it as my topic on the very fist day of class, even though I pointed out to him that it didn’t fit the criteria that he’d just listed for the students. (Arm-twisting? Heck no. There wasn’t even finger-twisting.)
Actually, I’ve been talking it up so much at the college that both of my dead-tree-and-pigment copies (yes, I got two) are being lent out, while I use my ebook copy from Baen to do research. Another professor was so taken by the idea of the story that he express-ordered it from Amazon for himself — I walked into his office and found him reading it. The library even got in its own copy last week.
Lord Darcy’s taking off. I love it.
Matthew Bowman
Christendom College
Front Royal, VA