‘Jack Reacher’ Is Entertaining Despite Questionable Casting of Cruise

I’ve never read the books of Lee Child. So I couldn’t share the outrage of fans when it was announced that Tom Cruise would play the character Jack Reacher in the new movie of the same name. (Reacher is described in the books as being 6’6″, and Cruise is almost a foot shorter than that.) I can sort-of understand the frustration of some, but I cannot empathize with it.

In fact, I didn’t even know who Jack Reacher was when I first saw the trailer for the movie, a trailer that made me laugh out loud. Tom Cruise as some badass “I’m-not-a-hero” antihero, obviously looking to reboot his action star career and possibly feed his ego? Who would want to watch that? But then I found out who Jack Reacher was, and the more I found out about the movie the more curious I became. Usually, I read a book before seeing the movie upon which it is based, but I decided to make an exception in the case of Jack Reacher. Boy, am I ever glad I did!

I have no idea what kind of books Lee Child writes. For all I know, they could be as preposterous as The Da Vinci Code. But if his work is even half as entertaining as Jack Reacher, I want to read these books! Okay, so the plot: a sniper named Barr takes out five random people, is quickly arrested and is going to be prosecuted. But Barr refuses to admit his guilt, and will only write down the words “Get Jack Reacher”.

We find out that Reacher is a ghost, a man with no past or present. Nobody knows where to find him, and so the only way he can be found is if he wants to be found. And soon enough, he strolls onto the screen, for reasons he reveals to Helen, Barr’s defense attorney (played by Rosamund Pike). Helen asks Reacher to investigate, but he is reluctant, being convinced of Barr’s guilt. But when he begins digging around, he soon realizes that the complete picture might not be quite so simple. With Barr in a coma—having been severely beaten by other prisoners—Reacher has no leads of any kind and nobody to turn to… but with nothing more than sheer doggedness and determination, Reacher eventually cracks the case.

Jack Reacher is a pleasant mystery-thriller. Much of the story’s tension is built through dialogue, and there are only a handful of action sequences. I can only think of four off the top of my head, and there aren’t too many others. The action works very well, and a curious choice is made: no music is played during these sequences. This turns out to be very effective, especially in the second-biggest action set-piece of the movie, a car chase through the city where the only sounds are the car engines. It was particularly interesting to experience this scene while I was sitting near the front of the theater with surround sound blaring these noises out around me.

The action may not be the most elaborate of the films released in 2012, but Jack Reacher knows how to deliver a thrill or two. The opening scene is a terrific example of this, as the sniper sets up shop and slowly scouts the area for prospective victims, before finally settling on one and beginning his killing spree. It’s a very tense segment almost entirely from the sniper’s perspective through the telescopic sight. It’s highly uncomfortable and thus instantly gets you involved in the action – you want to look away but you can’t, and so you’re forced to accompany the sniper as he chooses his victims.

Speaking of the victims, they’re pretty well-characterized. There’s a brilliant sequence midway through the movie where Rosamund Pike’s character basically interrupts the movie and tells Reacher everything she could discover about the sniper’s five victims. It’s a sort of narrated montage that highlights the tragedy of these lives that were cut short. At the same time – and this is the admirable achievement – it’s not a pointless interruption, because Reacher uses this information to come to some good deductions about the nature of the shootings. 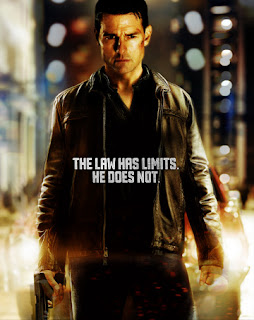 The mystery isn’t the world’s most complicated. Anyone who’s read enough detective fiction will spot almost the entire plot once they get certain pieces of information, but it’s tolerable because Reacher figures it out at pretty much the same time . The secret of the sniper’s attacks isn’t the newest trick in the book, but it’s an effective one when told well, and it’s told very well indeed in this film. In addition, it’s good to see some real detective work being done in a movie, and overall this is a better movie than Guy Ritchie’s second Sherlock Holmes movie, which we were subjected to about a year ago.

Ah, but I hear the voice of some dissenters who think that A Game of Shadows was better than the first Sherlock Holmes movie: “But Patrick, A Game of Shadows gave us Stephen Fry as Mycroft Holmes, a brilliant casting choice! What does Jack Reacher have to rival that?” Two words: Robert. Duvall. My goodness, he shows up in the third act and immediately proceeds to kick some serious ass in a role that seems like it was tailor-made for him. Duvall is obviously enjoying himself, and his scenes alone are worth the price of admission.

Tom Cruise does a good job as Reacher. He portrays the tough guy effectively, and the movie doesn’t bow down to his ego. In fact, there is only one shirtless-Tom-Cruise scene in the movie, and the film had enough wit to realize nobody really wanted to see that, so it’s turned into a joke. In fact, the movie is surprisingly funny quite often, with some genuinely witty repartee from Reacher… although be warned, there’s one line of dialogue involving the word “sandy” that is terrible and would’ve ashamed even a twelve-year old.

Is Jack Reacher perfect? No, but it’s a very fun, pleasantly entertaining movie. If this kind of movie sounds up your alley, I recommend it. I have no idea how faithful it is to the source material, but I can pay Jack Reacher one major compliment: it has genuinely interested me in the work of Lee Child, and I want to read it for myself now. And if there’s ever a Jack Reacher 2, I’ll probably be in the audience somewhere. I’d like to see more of this character.

Note: This movie suffers from truly unfortunate timing due to recent events that we of course have all heard of. I need not delve into their tragic nature here. Sensitive viewers might not be able to enjoy Jack Reacher at this time, and so please take that into account. I do think it is a movie worth seeing, whether on DVD or in the theater.