“Inside Man” and the Perils of “Transcending the Genre”

I recently got around to viewing Spike Lee’s bank robbery hostage drama Inside Man. It’s a watchable film, but it’s marred by two huge problems, one of them aesthetic and the other in the realm of ideas.

Both flaws come about because Lee is trying to do more than just make a solid crime drama. That’s an honorable intention, of course, but in most cases efforts to "transcent the genre" result in neither a good genre work nor a good non-genre work. That is what happens with Inside Man. It is neither fish nor fowl.

First, the good. The film features Denzel Washington, Clive Owen, Jodie Foster, and Christopher Plummer, all of whom are talented and charismatic performers, and each of whom gives a quite competent effort in the film. They make the movie worth watching.

A central plot element of the film is much less appealing and skillfully executed, unfortunately. The owner of the bank that is being robbed in the film turns out to have gotten his start in Switzerland during World War II by collaborating with the Nazis to turn stolen art works into Swiss cash. He has built his empire on dirty money earned on items stolen from Jews murdered by the Nazis. Awful.

That’s certainly bad, but it doesn’t make sense in this film. I disapprove of Nazism in the strongest terms. Of course. But that was more than sixty years ago, which makes Plummer’s character at least in his mid-eighties (and he doesn’t look it, by any means). A much more sensible approach would have been to have Plummer’s character have gained his money by, say, collaborating with the Soviet Union in 1956 to betray Hungary, or in 1968 to betray Czechoslovakia.

Oh, but that wouldn’t work, would it? Communists always had Good Intentions, even if their methods were sometimes not perfectly nice, so they can’t be behind a Real Villain. No, that status is reserved for Nazis, white South Africans (now being murdered willy-nilly with no outcry at all from the West, by the way), mythical white separatists in America, and other, well, blond people.

So of course any dirty money had to come from Nazis, however absurdly anachronistic that is in a contemporary film.

In addition, the fact that this bank just happens to have been founded by dirty money is asinine. The implication that riches based on dirty money are rampant in our society is an utterly absurd and false notion. People in America get rich by offering people what they want to buy, not by robbing Jews. To suggest otherwise is ignorant, stupid, and evil.

This is a particularly silly notion to be offered by Spike Lee, a man who has made a good deal of his own personal financial fortune by selling overpriced athletic shoes to poor, teenage boys, many of whom thought the shoes so important that they committed crimes in order to get them. 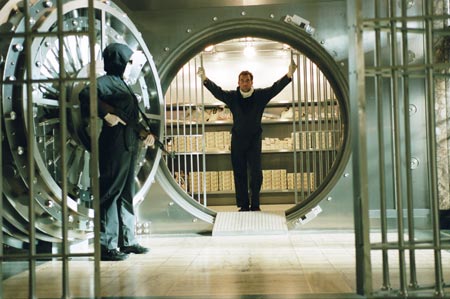 Turning to aesthetics, the big artistic and dramatic flaw in the film is the inclusion of the character played by Jodie Foster. This character is a "fixer" who goes around solving problems for rich and powerful people. This is a character that deserves a film of its own, but she is entirely unnecessary to the story of this film and is shoehorned in without adding anything of value.

Taking out her story line would have reduced the bloated two hour and nine minute running time by a good twenty minutes, much increasing its dramatic impact.

Of course, Lee does a little something here and there with the character, using her to provide temptations to corrupt the central character, a hostage negotiator played by Denzel Washington (superbly, as is his usual way). But these temptations could have been done through other characters, and Foster’s story line just bogs the narrative down.

Lee is a good director of actors, and the performers he has obtained for the film are very good, as mentioned, so at least the thing is watchable. But it could have been much more had he tried to do considerably less.

Thanks, Jordan.
You’re right to point out that the film’s observation about video games is very good. Thanks for bringing it up.
As to Plummer’s character, just think about how many prominent spy novels and films of the 1960s and early ’70s had bad former Nazis at the center. It was a cliche then, and it’s an unconsionably irrelevant one now, in my view. Adding the Swiss bank angle doesn’t do much to make it any less silly for me.

Nice review and I generally agree, although I disagree about the cliche factor of Plummer’s character and Nazi gold.
Did you notice on Lee’s commentary on video games, which I explore to some extent here?