Exclusive to The American Culture: Rebecca Cusey reviews I Am Legend and says there’s much more to it than zombies and action scenes.

Will Smith proves his acting chops and good sense yet again by starring in I Am Legend, a post-apocalyptic suspense thriller in theaters this Friday.Like M. Night Shyamalan’s alien thriller Signs, I Am Legend uses an extreme and unlikely situation to explore ideas of God, human nature, and sacrifice.

It’s a pulse-pounding flick for people who like movies in which things jump out at you, but it’s also one that throws out some deeper questions to ponder while waiting for the adrenaline to fade.

As the film opens, scientists, full of hubris, announce an altered virus that cures cancer. Things go badly, as they so often do in film, and the virus mutates, killing 90% of the world’s population.

A miniscule portion of humanity is naturally immune. The virus turns the remaining hordes into “Darkseekers,” formerly human beasts who avoid all light and have anger management issues. They live in a state of perpetual rage, screaming, biting, clawing, and generally acting like homicidal two year olds desperately in need of a nap. A permanent nap.

The Darkseekers’ goals are simple: To attack any living creature and tear it limb from limb. Dr. Robert Neville (Will Smith) also has a simple goal, but one harder to achieve: To find a cure that will turn the beasts back into human beings.

As presumably the last survivor in New York City, he spends his days with his dog Sam hunting deer in the tall grass in Times Square, tending a corn patch in Central Park, and practicing long drives off the tail wings of an Air Force SR-71 Blackbird abandoned on an empty aircraft carrier. When the sun starts to sink, and the Darkseekers emerge, man and dog barricade themselves in an iron-reinforced house with the mother of all emergency supply kits, an arsenal of big guns, and a basement lab containing humanity’s only hope. 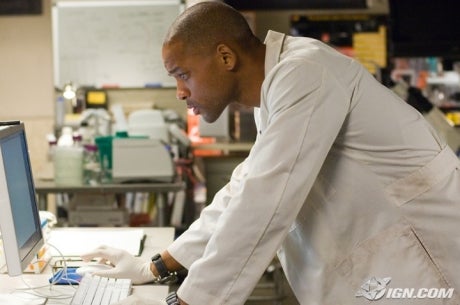 It’s not exactly new territory. We’ve seen similar situations in a host of zombie movies, most recently 28 Weeks Later. The 1971 classic The Omega Man was also based on the same book, Richard Matheson’s I Am Legend.

The movie covers the ground well. A deserted New York City, frozen both in fading decorations of the Christmas season and in the chaos that put an end to all Christmases, provides an eerie backdrop for Robert’s loneliness. It also hosts lots of shadowy tenements, tunnels, and seedy hotels in which the Darkseekers can lurk.

The suspense builds as we first hear and then meet the surly neo-New Yorkers. Tension rises as the danger builds, but not always in predictable ways. Will Smith, on screen for nearly every minute of the film, carries the weight of the movie well. He conveys terror, strength, sorrow, and crushing loneliness, as well as affection for his faithful pooch, and moments of humor.

The worst instances of the zombie genre are little more than slashfests, but the best illuminate something about ourselves. Fortunately, this one falls on the side of illumination. The Darkseekers, although human in DNA and shape, have lost all humanity. They have reverted to an animal state, not in a sweet, fuzzy, bunny rabbit way, but something closer to jackals and cockroaches.

Robert, holed up in his classic brownstone with what used to be valuable art on the walls, has the products of thousands of years of civilization at his disposal. He collects music, movies, and books and has a de facto membership to New York’s museums.

He is possibly the only creature on earth that can learn from history, absorb beauty from art, and plan for the future in a meaningful way. All these things are vital to what it means to be human, and they all reside solely in Dr. Robert Neville. 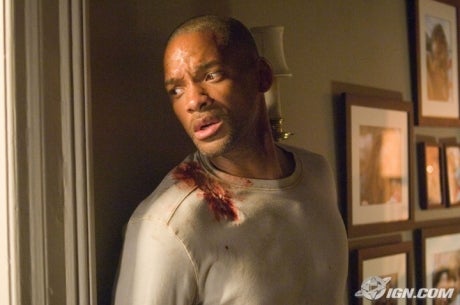 Of course, there is no future if he cannot find a cure and if there are no other survivors. Robert, portrayed in flashbacks as a family man and a man of faith, now finds God distant and irrelevant. Although he still clings to Bob Marley’s vision of fighting the darkness by lighting a light, Robert can no longer believe in a God who directs his steps.

As the final showdown approaches, however, his disbelief is challenged. He is forced to choose between despair and hope. And not just any hope, but one that is firmly grounded in belief in God.

None of us, with the exception perhaps of a holiday shopper trying to purchase the last Wii in the store, is likely to encounter the kind of ferocity that Robert does. We can be thankful that we don’t need a pandemic and the ensuing zombies to know that something important separates men and women from beasts, and that listening for echoes of God is part of it.