The film merits attention. More than just a sports movie, Invincible tells the true-life story of Vince Papale, a 30 year old bartender who made the Philadelphia Eagles in an open tryout that then-new Eagles coach Dick Vermeil meant as mostly a publicity stunt and a way of motivating players.

Set during the economically depressed late 1970s among the working class in Rust Belt South Philadelphia, the film presents the theme of hope in several different ways.

First, of course, there is Vince’s hope—vague at first but increasingly real—of making the Eagles as a wide receiver and special teams player. (Mark Wahlberg’s portrayal of Vince is very solid and affecting.) Second, there is Vince’s hope of finding a woman who will love him and stay with him through good times and bad. Third, there is the hope of Vince and his working class brethren that they will find permanent work that pays decently. (The film regularly cuts to brief scenes showing union members on strike, in the bar discussing job cuts, and so on.) Fourth is the hope of Eagles coach Dick Vermeil (excellently played by Greg Kinnear) to bring some pride and intensity to the team. Fifth is the way the exploits of professional football players bring hope to people who follow the team. The film makes a point of telling how the memory of a great play by an Eagles player got Vince’s struggling, blue-collar father through 30 years of hard times. 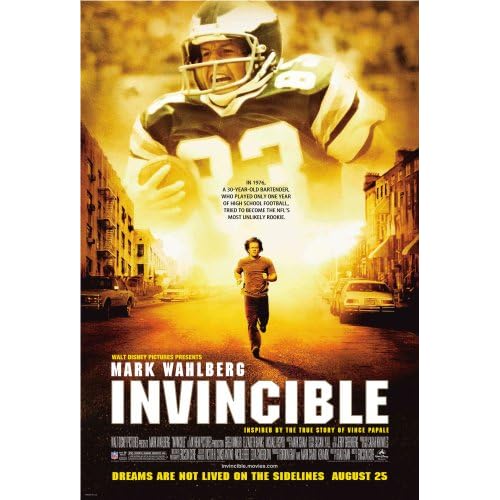 That may be a bit of an exaggeration, but not much. People in difficult conditions, especially men, do often find inspiration from the unlikely successes of sports heroes, especially underdogs. That is what athletic competitions bring most richly to the culture, and it is why we care about them. The moral drama of individuals trying through hard work to overcome others’ advantages is a microcosm of American life, and it provides inspiration to all those who care to find it.

That insight is what makes Invincible such an inspiring and impressive film.