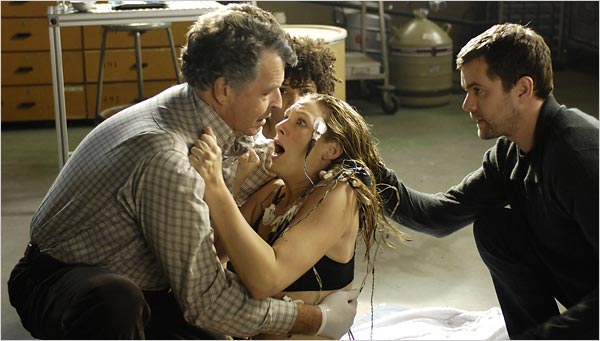 Fox’s well-received new series Fringe is something of a throwback to 1960s escapist TV dramas. That’s a good thing.

This past summer when the second X-Files movie tanked at the box office, I observed that its fanciful horrors and conspiracies paled in comparison with the real-life terror of the 9/11 attacks and the instability our nation has endured in the years since.

Yet the new Fox drama series Fringe, which tackles the same kind of weird subject matter The X-Files dealt with, has done well with both critics and audiences. It’s now the highest rated new show among the much sought-after 18-49-year-old demographic.

However, in line with the greater suspicion directed toward business in the United States in recent months, the evils seem not to be directed by governments but instead by private individuals, weirdo groups, and businesses. However, of the three people composing the center of the team fighting the problems, one is a former research scientist and the other an independent businessman (father and son, and both geniuses), neither of whom is a government employee. Hence the show avoids making a heroes/villains judgment regarding business and government.

In the conspiracies and paranormal aspects, the show is rather like The X-Files, of course, but Fringe benefits from having a less gloomy tone than its predecessor. Although the first couple of episodes were rather full of personal conflicts, and each of the central characters is carrying around personal problems of some sort, they nonetheless smile on occasion, jest with each other, and even laugh sometimes. In this respect one can see the influence of another Fox series, Bones.

The central character, Olivia Dunham, is a young FBI agent whose partner died after apparently betraying the country by assisting in the creating of a flesh-eating disease. She has unresolved emotional problems because of this, understandably, especially since they were also lovers, but she gamely presses on with her work.

An interesting aspect of the show is that each of the three central characters has been held back from fulfilling their full potential in the past, but their work in investigating The Pattern now allows all of their talents to come to the fore. That’s one of the many things that makes the show a little different from the general run of contemporary TV dramas by putting an optimistic and positive element behind the main conflicts.

In all, in fact, Fringe seems much more like mid- to late-’60s escapist, adventure dramas such as The Man from UNCLE, Mission: Impossible, and The Wild Wild West than the grim police procedurals the networks have tended to offer in recent years. If that’s the start of a trend, it will be a welcome change.