Free Will, Determinism, and Pop Culture

The central moral issue of the past century was whether a traditional (in fact, millennias old) assumption behind moral thinking should prevail, or should be replaced by a newer, seemingly more compassionate thought. It is a matter over which American society is still struggling.

The classical Western notion, of course, was that an individual is responsible for his or her own actions, even if outside circumstances contributed to the person’s decision to break a rule. That meant, for example, that even poverty did not excuse theft.

Of course, even if personal responsibility was assumed, mercy and common sense were essential to the dispensing of true justice. Western morality and our sense of justice always recognized that sometimes, albeit rarely, an individual’s circumstances can be so compelling as to excuse rule-breaking. And of course anything not done by choice, such as killing a person in self-defense, was automatically excused.

This mindset was challenged in the past century by the philosophy of determinism.

Resting on the obvious truth that all material actions are caused in some way or another, the moral philosophy of determinism extended this to suggest that to a great extent human beings do not act freely by their own choice. It is in fact a highly sophisticated argument, but it ultimately rests on the assumptions of philosophical materialism.

In its popular manifestation, in any case, moral determinism led to the idea that criminal behavior was largely not a matter of free choice but instead an inevitable consequence of the circumstances in which the wrongdoer found him- or herself. Hence the emphasis on "alleviating the root causes of crime" as opposed to removing criminals from society and punishing them to lower the attractiveness of the choice to engage in criminal behavior.

Such a mentality certainly benefits those who commit crimes, of course, as they are fairly easily absolved of responsibility for their actions, and punishment is increasingly hard to justify. It is seriously deaf to the victims of crime, however, as it places the emphasis on the awful circumstances that drove the criminal to harm someone, and concentrates efforts on removing those circumstances. What it does then, is make a perverse quest of bettering the lives of the criminal class, rewarding them for their misdeeds.

As a result of this perverse situation, instead of simply holding criminals more responsible for their actions, "victims’ rights" organizations sprung up, with the intent of providing ministrations to victims to give them "closure," meaning to reconcile them to the fact that they were victimized by others and that nothing good was going to be done about it or any real effort made to reduce the incidence of such crimes.

By the 1980s, this elaborate scheme of superficial niceness to both criminals and their victims and refusal to pursue real justice had become clearly absurd and harmful, and a reaction set in. Since that time, American society has been torn between the two approaches to moral responsibility, with the criminal justice system and social welfare apparatus moving more toward the notion of personal responsibility while the schools inclulcated a deterministic moral philosophy.

This argument between two philosophical approaches has also played out widely in the culture, esepcially in crime fiction. For me one of the best forums for contemplating issues of moral responsibility has been mystery fiction, and I think that most of the best instances I’ve seen of such treatment have been in the realm of classic puzzle mysteries. 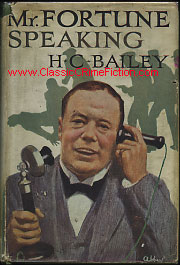 One such writer is H. C. Bailey, author of the classic Reggie Fortune mysteries. Bailey quite consciously tackled the issues of personal responsibility and possible compulsion, and his main detective, Reggie Fortune, often openly recognized that legal guilt and moral responsibility can be two very different things. As a result of this recgonition of tension between two notions, Bailey’s mystery stories have a fairly sophisticated moral point of view.

But moral sophistication does not, in this case, mean decadence. Bailey recognizes the difficulties in establishing the truth of free will and personal responsibility, but he recognizes that in practical terms they must be assumed to be true or society will devolve into chaos. The key, as Dr. Fortune’s actions make clear, is that each situation be analyzed thoroughly so that the response is just and true for that instance. That, it is clear, is all that we can hope to do in this world.

In a 1935 profile of his great detective character Reggie Fortune, "Meet Mr. Fortune," Bailey demonstrates this truth by directly and insightfully addressing the question of personal responsibility for one’s actions:

On the conviction of a criminal he [Fortune] has sometimes been heard to repeat the phrase of the old divine, "There, but for the grace of God, go I." But this does not proceed from the comfortable philosophy that anybody may be a rascal if circumstances impel him that way. Mr. Fortune’s creed is that the original impulse in a great deal of crime is a motive which many or most people feel. The distinction of the criminal is that he indulges it selfishly. For that selfishness when it wrongs others Mr. Fortune finds no excuse in difficult or tempting circumstances. A cruel crime is to him the work of a pestilential creature, and he sees his duty in dealing with such cases as that of a doctor in "treating" illness. The cause must be discovered and extirpated. There is no more mercy for the cruel criminal than for the germs of disease. Both must be made innocuous. The measures taken against both must be such as to diminish the danger of further infection.

Here, as in the best of his stories, Bailey manages to square the circle morally: fully recognizing the power of circumstances while thoroughly accepting the fact that what distinguishes the criminal from the rest of us is the choice to break the rules.

Philosophy, as Bailey and Fortune both recognize, can serve as a foundation for action, or it can serve as an excuse for shirking one’s responsibility to protect those who cannot protect themselves. And the latter class, of course, includes all of us at one time or another (in childhood, in dotage, and at least eight hours of every day of our lives, as we sleep). It is why the Reggie Fortune stories so often deal with threats or crimes against children—they are among the most clearly defenseless of us all, and the defenselessness of victims is what makes crime so repugnant.

As Bailey makes clear, the honorable route is to take the measures necessary to ensure the protection of the innocent. This attitude should be neither eccentric nor particularly courageous, yet it too often seems so, both in the real world and in fiction.

The power of popular culture is that it enables us to see the consequences of our assumptions without having to suffer them ourselves.

Unfortuntunately, we are all too often wont to ignore the warnings and forge ahead anyway. That is our choice.

Ars longa vita brevis
Whether the origination of behavior is free or determined, there is no doubt that there are those among us who appear to wish to make us dependent upon there vicarious tastes. This is most likely determined.(Adriane Raines)
Our art of the present day is know nothing and plutocratically based to extract a large profit for a small price with no regards to anyone’s sustainability but one’s own.
Thank you for your consideration.
Bhakta David Nollmeyer