You know a musical act is truly successful when its members and hangers-on start suing one another. The Beach Boys have been very successful for a very long time. 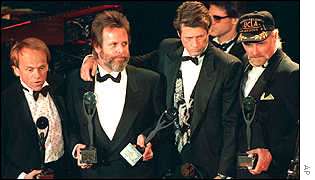 Two former members of the legendary rock group The Beach Boys have settled a lawsuit over the use of the band’s name. Details of the settlement were not released to the public. 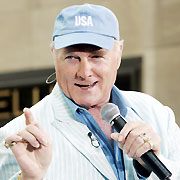 Singer and lyricist Mike Love, who never misses an opportunity to claim false credit for the band’s success, had sued longtime bandmate and childhood friend Al Jardine (singer and guitarist) in 2003 for using variations of the Beach Boys name for a touring band that included neither Love nor Beach Boys co-founder Brian Wilson.

Wilson, who was the band’s primary songwriter and producer during its most successful times, was not involved in the legal battle, having moved on to a successful solo career and basking in well-deserved public admiration for his musical accomplishments of the past half-century.

The ironically named Love had sued Wilson in 2005 for the songwriter’s use of the name "The Beach Boys" in promoting his brilliant 2004 album SMiLE, Wilson’s long-awaited completion of the record that was supposed to follow Pet Sounds in the mid-’60s but was set aside after he began to suffer psychological problems and fell into drug abuse, from which it took him decades to recover.

Love responded to the outpouring of admiration and affection for Wilson’s Smile with a lawsuit.