An article in today’s Los Angeles Times observes that the reputation of the American film critic appears to be at an all-time low:

With a sly, leering note of triumph, the narrator intones: "Unfortunately for them, we just made ‘Number Two.’ "

All in all, it’s been a rotten tomato of a summer for America’s embattled film critics. "Pirates of the Caribbean: Dead Man’s Chest" broke box-office records left and right, despite a yowling chorus of negative reviews. M. Night Shyamalan cast Bob Balaban as a persnickety film critic in "Lady in the Water," then gleefully killed him off, allowing a snarling jackal-like creature to do the dirty deed. . . .

It’s no secret that critics have lost influence in recent years. A recent Los Angeles Times/Bloomberg poll found that among 18- to 24-year-olds, only 3% said reviews were the most important factor in their movie-going decision making. Older audiences still look to critics for guidance, especially with the smaller, more ambitious studio specialty films. But during the summer months, with studios wooing audiences with $40 million worth of marketing propaganda, critics appear especially overwhelmed, if not irrelevant.

The article goes on to suggest a number of reasons for this disdain for film critics, ultimately opting for the one thing that explains everything these days, the Internet:

The media have been full of stories questioning the relevance of print critics in an Internet era that has ushered in a new democratization of opinion. The prospect of babbling blogmeisters being the new kingpins of cinema has left many critics in a sour mood. Reviewing a collection of critical essays by the long-time Village Voice jazz critic Gary Giddins, Time film critic Richard Schickel contrasted Giddins’ work with "history-free and sensibility-deprived" bloggers who regularly "blurb the latest Hollywood effulgence." . . .

According to New Line marketing chief Russell Schwartz, "younger moviegoers want the immediacy of text messages or voice mail. A review from one of their peers is more important than a printed review from a third party they don’t know, which is how they would describe a critic."

When in doubt, blame technology. Certainly the changes in information delivery have altered the way we approach things, and even how we see them. In particular, the breakdown of media hierarchies—the declining influence of the top-circulation newspapers and three TV networks—has flattened the playing field and made it possible for a pajama-clad blogger to reach as many people as a large media organization, or more. That observation has already become a boring truism. However, the phenomenon surely has had an effect of "democratization," but it is interesting and important to note how the process works: it simply reduces a sense of authority and forces writers to earn their readers’ attention with everything they write:

What we’re seeing is not so much the death of criticism as the death of the culture of criticism, the culture in which a critic such as Pauline Kael — despite writing for a small circulation magazine like the New Yorker — could have a huge trickledown influence, not just with the chattering class, but with filmmakers and executives who hung on her every word, either in agony or ecstasy, depending on the verdict.

What today’s film critics have to deal with that Pauline Kael didn’t have to worry about is truly serious competition. Kael could pontificate her nonsense from her safe haven at the New Yorker, and her obedient claque of followers at newspapers and magazines around the country would duly parrot her views, and nobody could gainsay them because, as has been wisely said, freedom of the press is for those who own one.

Kael won her following through networking and bluster and because her worldview fit the tenor of the times perfectly. Her militant leftism, atheism, intellectual elitism, advocacy of hedonism, obsession with novelty and hatred of tradition and formulas, belief in the primacy of emotion over reason in the arts, and the rest of her odious, fatuous opinions were cultural Red Bull for postwar American pseudointellectuals. I’ll write more about Kael some other time, but for now the important thing to bear in mind is that Kael was influential regardless of whether her reviews made any sense. (They didn’t.) Kael’s goal was nothing less than to contribute to social change by undermining what she saw as outmoded, irrational, bourgeois values.

The influence of Pauline Kael has been huge, and the smugness and elitism she brought to the world of film criticism have only begun to be eroded, largely by critics from the political right. Naturally, Kael’s influential followers and their descendants are livid about it, as exemplified by the furious salvoes against Debbie Schlussel fired off earlier this year by Roger Ebert’s web editor on Ebert’s website. 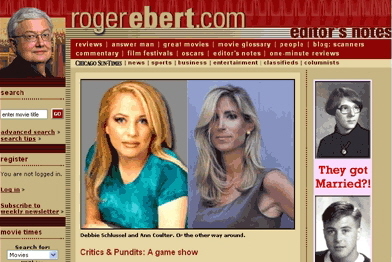 The absurdity of Ebert’s assistant characterizing Schlussel and Ann Coulter as "pundits" is absolutely astounding. Ebert has made millions of dollars as a TV film pundit, giving his opinions on why he likes or dislikes this film or that, but let an attractive, right-wing female venture into the sacred territory of film criticism and we find that having thoughts about what movies actually mean is a contemptible thing.

That is the real problem with film critics today: Their complacency and lack of contact with either their audiences or their ostensible subject matter. When critics attacked Dead Man’s Chest (which I thought was a terrific film), they didn’t just disagree with the audiences. They were wrong. There is plenty of meaning in Dead Man’s Chest, and the fact that the criticisms focused on superficial matters (such as the amount of money it cost to make or whether the film brought anything "new" to the series) shows a positively grotesque and unacceptable ignorance of the basic principles of the aesthetics of narrative art. Audiences clearly understood that Dead Man’s Chest was well worth watching, even if most people could not have articulated the film’s themes or deeper meanings. But they understood intuitively that the film was meaningful, for without meaning there is no comedy nor adventure.

A reasonably intelligent critic will recognize that narratives are all about testing and revealing the character of imagined human beings, and the sensible critic will approach a film or novel from that perspective, seeking out what it tells us about ourselves and how the aesthetics of the form are being used to achieve these things. In so speaking to us, films, dramas, books
, and other narrative art cause us to identify with their characters, sympathize with them, puzzle out their motives, and critique their actions. Most major film critics today, however, still follow the Kael formula, seeking to foster social change by pushing their readers to films that will "challenge" them, meaning movies that will undermine the principles of the bourgeoisie. That is why critics push filmgoers away from movies like Dead Man’s Chest and toward Brokeback Mountain. It’s all about changing the world by changing people’s minds.

Although often doing so in the guise of being neutral but highly informed consumer guides, film critics of today typically use their positions as platforms for criticizing the values and ideas their audiences hold dear.

That is why the public can’t stand them.