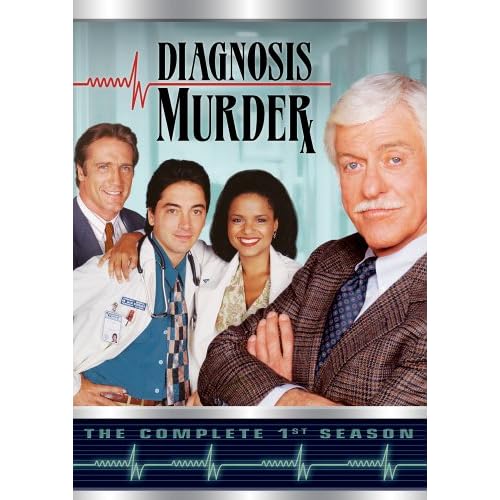 Season one of one of the most appealing and enjoyable TV mystery series goes on sale today, as the DVD set of Diagnosis: Murder becomes available. Starring Dick Van Dyke as Dr. Mark Sloan, the series ran for several seasons on CBS during the 1990s. The first season, released on DVD today, is the best season, but the show was always very entertaining. The mystery plots were fairly strong during this first season, and often played reasonably fair, giving enough clues at least to keep the viewer guessing, even if there weren’t enough actually to solve the mystery.

It’s interesting that Van Dyke was so well cast in this show, as it is a strange fact that comic actors often make very good TV mystery sleuths. Consider, for example, just working from memory here:

Rock Hudson and Susan St. James in McMillan and Wife

George Peppard in Banacek (one of his early films was Breakfast at Tiffany’s, and he brought his great flair for comedy to The A-Team later)

Bruce Willis in Moonlighting (as our friend Cris Rapp of south Florida has reminded us), who is an expert comic actor as well as a superstar action dude

Leo McKern as Rumpole of the Bailey

Bill Cosby in The Cosby Mysteries

Peter Lawford in The Thin Man

George Segal in the short-lived and underrated Murphy’s Law

Robbie Coltrane in Cracker (and Robert Pastorelli in the U.S. version)

Darren McGavin in Kolchak: The Night Stalker (and as Mike Hammer in the late 1950s!)

Gerald McRaney in Simon and Simon

In addition, numerous performers not known mainly for comedy have shown a great flair for it in mystery programs, including Peter Falk in Columbo, Robert Wagner and Stephanie Powers in Hart to Hart, Helen Hayes and Mildred Natwick in The Snoop Sisters, Angela Lansbury in Murder, She Wrote, Dennis Weaver in McCloud, Robert Conrad in the genre-hopping Wild Wild West, Ian McShane in Lovejoy and The Dick Francis Mysteries, and Pierce Brosnan in Remington Steele.

Why? Perhaps it’s because if one is to be successful at comedy it helps to be fairly intelligent. Could be. We can leave it there as a preliminary hypothesis, anyway.