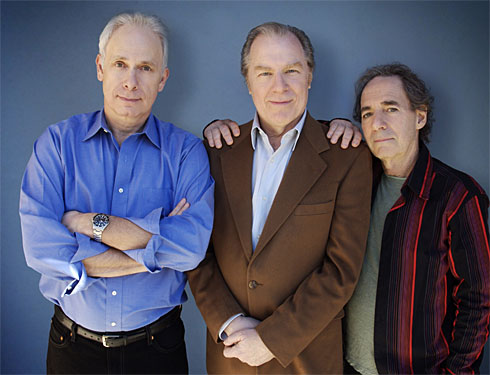 The aging geezer comedians who invented the hilarious send-up of hard rock and heavy metal in This Is Spinal Tap and several record albums, TV appearances, and concert tours is back at it. They’re going on thirty-city tour beginning April 17 in Vancouver, with tickets going on sale tomorrow (Friday, March 6).

Instead of jogging around the stage fully costumed—which puts a strain on the old fellows’ hearts—the band members will perform without their customary wigs and absurd costumes, and they will use acoustic instruments only. The appearances are billed as the band’s "Unwigged and Unplugged" tour.

I appreciate the humor in the band’s lyrics, but I like much of Spinal Tap’s music for its real musical values. It might be interesting, then, to see the band perform in this way, which would seem likely to afford an opportunity for an unusually direct appreciation of the melodies and harmonic textures.

Comment here on Spinal Tap and the band’s musical value.