A strange, spiritually infused novel by a troubled Oregonian tech representative has hit the best-seller lists, thanks to plenty of free publicity in Christian media outlets. But it may be a very un-Christian book. 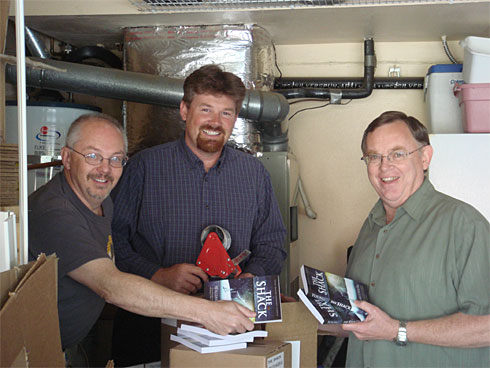 As USA Today reports, a novel aimed at the "spiritually interested" and employing Christian ideas and imagery in decidedly eccentric ways has hit the best-seller lists:

A little novel written by an Oregon salesman and self-published by two former pastors with a $300 marketing budget is lighting up USA TODAY’s Best-Selling Books list with a wrenching parable about God’s grace.

First-time author William P. Young’s book The Shack, in which the father of a murdered child encounters God the Father as a sarcastic black woman, Jesus as a Middle Eastern laborer and the Holy Spirit as an Asian girl, is No. 8 on the list.

Published a year ago and promoted by snowballing attention on Christian radio, websites and blogs, The Shack ($14.99) is now in mainstream bookstores and Wal-Marts nationwide, and the trio behind it are talking to Hollywood about a possible film deal.

The book was rejected by Christian publishers as too "edgy" and by secular publishers as too "Jesus-y," co-publisher Brad Cummings said, according to the USA Today story. Thanks to the free publicity on Christian media, the book has sold three-quarters of a million copies.

Here, for example, is the enthusiastic product description from one of those places, Christianbook.com:

Mackenzie Allen Philips’ youngest daughter, Missy, has been abducted during a family vacation and evidence that she may have been brutally murdered is found in an abandoned shack deep in the Oregon wilderness. Four years later in the midst of his "Great Sadness," Mack receives a suspicious note, apparently from God, inviting him back to that shack for a weekend. Against his better judgment he arrives at the shack on a wintry afternoon and walks back into his darkest nightmare. What he finds there will change Mack’s world forever. In a world where religion seems to grow increasingly irrelevant "The Shack" wrestles with the timeless question, "Where is God in a world so filled with unspeakable pain?" The answers Mack gets will astound you and perhaps transform you as much as it did him. You’ll want everyone you know to read this book!

Unlike the Christianbook.com blurb, the USA Today story strongly implies, but does not document, that the book’s theology is decidedly unorthodox, and it emphasizes that people connect emotionally with The Shack. The book does seem perfectly pitched to reach people harmed by the disturbed family and social relationships of our divorce-prone and publicly antinomian era:

He wrote the book to explain his own harrowing journey through pain and misery to "light, love and transformation" in God to his six children, ages 14 to 27.

Eleven years ago, Young says, he was hanging on by a thread, haunted by his history as a victim of sexual abuse, by his own adulterous affair, by a life of shame and pain, all stuffed deep in his psyche.

"The shack" was what he called the ugly place inside where everything awful was hidden away. The book is about confronting evil and stripping the darkness away to reveal a loving God within, he says.

Apparently The Shack is reaching a large number of people with a message of personal responsibility and redemption. If so, it would be a very good thing indeed.

Unfortunately, there are strong reasons to believe that The Shackis not doing that at all.

Despite its value as a form of literary therapy, the book may be doing much harm by spreading false ideas about God. In particular, it is easy to see in the book’s plot description a strong element of syncretism. A review by Berit Kjos on the Kjos Ministries website confirms this and outlines what Kjos identifies as some of many doctrinally false aspects of the book:

For example, this new "Jesus" never returned to heaven. Was there no real resurrection? Not according to the female "God":

“Although by nature he is fully God, Jesus is fully human and lives as such. While never losing the innate ability to fly [which he demonstrates in the book], he chooses moment-by-moment to remain grounded. That is why his name is Immanuel, God with us…."[1, p.99-100] . . .

But the Bible tells us that Jesus did return to His heaven after His crucifixion.

This does seem an unnecessary and wrong claim for author Young to attribute to God the Father, and it probably would muddle the thinking of anyone who tried to reconcile it with the biblical teachings on the matter.

Kjos then goes on to identify another unorthodox aspect of the book:

Besides, neither God our Father nor the Holy Spirit made themselves finite or visible to man. "No one has seen God at any time," said the true Jesus. (John 1:18) Yet, here we see all three in human form — on earth! "

Although Kjos makes a valid observation here, Young’s narrative choice in this instance strikes me as within the bounds of allowable fictional license—although perhaps only just within those bounds.

Kjos continues his indictment with a direly serious charge:

Unlike the true God, this false trinity exercises no authority over man. That should please today’s postmodern church leaders! They seem to shun words such as "sovereignty" and "authority." After all, a reigning God who sets the moral standard for all time could cause division. He could impede their main purpose: inclusive relationships and "authentic community."

Kjos follows this with evidence from the book, making a strong case that The Shack does indeed suggest that God approves of antinominism, a thoroughly unbibilical claim. As part of this analysis, Kjos notes the following:

Notice how The Shack’s false "God" mocks our true God by minimizing His sovereignty and judgments:

"I’m not a bully, not some self-centered demanding little deity insisting on my own way. I am good, and I desire only what is best for you. You cannot find that through guilt or condemnation…."[1,p.126]

"You don’t need me at all to create your list of good and evil. But you do need me if you have any desire to stop such an insane lust for independence….  Mackenzie, evil is a word we use to describe the absence of Good, just as we use the word darkness to describe the absen
ce of Light. …evil and darkness can only be understood in relation to Light and Good; they do not have any actual existence."[1,p.136]

Clearly the attempt to create a God more attractive to people who are not yet ready to let go of their sins has led Young to take the idea of forgiveness far beyond its real meaning into an acceptance of evil by defining it out of existence. That, however, destroys the very notion of forgiveness, for if we are not responsible for our wrongdoings (which is what Young clearly implies), then we have nothing for which we need to be forgiven.

In which case, Christ’s sacrifice was for nothing.

Kjos aptly quotes another author in this regard:

These absurd claims remind me of Ray Yungen[‘s] wise words, "Satan is not simply trying to draw people to the dark side of a good versus evil conflict. Actually, he is trying to eradicate the gap between himself and God, between good and evil, altogether."[6]

Noting the similarity between ideas in The Shack and the New Age spiritualist book A Course in Miracles, Kjos analyzes this perversion of the notion of forgiveness:

Both books demonstrate a perverted kind of forgiveness — the world’s way of promoting unity and healing apart from the cross. Not only does Mack learn to "forgive" all who have hurt him, he also forgives "God." As if God had done something wrong!

It may sound loving to claim universal salvation through human forgiveness. But it’s not Biblical! This counterfeit "Jesus" has totally divorced himself from God’s Word — the living Word which is the true Jesus. (See John 1:14)

However much we may sympathize with those who have been bruised and broken by the disturbed conditions of our society, giving people temporarily comforting falsehoods will just spread the misery. There appears to be strong evidence that that is exactly what The Shack is doing.

Should be an interesting book, would also like to recommend this new book by Dr Gary Chapman -“Love is a Verb” It’s all about love and relationships, very moving and inspiring true stories –
http://www.bizymoms.com/books/love-is-a-verb/index.html
There is a contest as well to win an autographed copy of his new book “Love is a Verb” –
http://www.bizymoms.com/books/love-is-a-verb/contest.html