Abrupt End to ‘The Beautiful Life’ 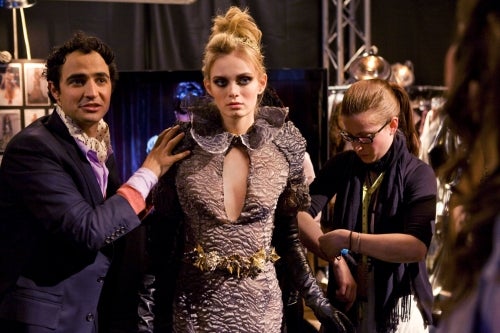 The ax has fallen on the first casualty of the new TV season. S. T. Karnick explains why.

Less than a week after the official inauguration of the new TV season, the first series cancellation has been announced. The CW Network has axed the Wednesday night drama series The Beautiful Life after just two episodes.

The show will be replaced initially by reruns of Melrose Place, beginning this Wednesday at 9 p.m. EDT.

It’s easy to see why the CW felt compelled to dump The Beautiful Life so quickly: the show brought in an awful 0.5 rating among those aged 18-49 for the two episodes the network broadcast.

It’s also clear that The Beautiful Life was unlikely to connect with a large audience.

The show dealt with the lives of gorgeous high-fashion models in glamorous Manhattan. In the pilot episode a farm boy from Iowa is initiated into this world as an aspiring model–and he and Raina, a young female model from a disturbed family, provide the point of view characters for the dumb, loser schlubs who presumably were expected to watch the show.

The intentional irony in the show’s title is that although the young people are indeed physically beautiful, their lives are anything but, as the cutthroat competition for the best assignments leads to blackmail, backbiting, obstacles to romance, attempts to destroy one another’s career, and the like. But of course even with all these difficulties and the basic decency of the two main characters it would have been immensely difficult for the audience to identify with these beautiful people.

In addition, there was really nothing major at stake for the characters. After all, should they fail to make it in the fashion world, they would simply have to get ordinary jobs like the people in the TV audience. Not exactly a tragedy.

Plus, they’d still be gorgeous.

The Beautiful Life wasn’t unpleasant to watch, and it did begin to set up some interesting dilemmas for the characters, but from the start it was destined to strike people as just too trivial and superficial–much as we tend to see fashion models themselves, regardless of whether they deserve it.

Hence it’s quite telling that The Beautiful Life will initially be replaced by Melrose Place reruns. Although Melrose Place likewise deals with the struggles of gorgeous young people in a glamorous location, its greater emphasis on the moral issues facing the central characters makes it much easier for audiences to identify with them and see the value in the show’s soap-opera story lines.

As Melrose Place shows, even formulaic TV dramas can do more than just parade pretty faces across the screen. Those who would succeed in that business would do well to recognize that.