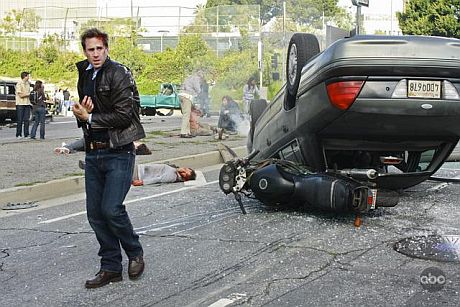 The interesting new ABC series FlashForward is part of a trend toward movies and TV shows about megadisasters, S. T. Karnick writes.

The new ABC drama series FlashForward (Thursdays, 8 p.m. EDT) tries rather successfully to recreate the mysterious atmosphere of the network’s hit show Lost, beginning with a global catastrophe that takes the plane crash that began that series and hikes it to a far more spectacular level. It’s an impressively well-directed scene in the pilot episode and sets a suitably mysterious and dramatic tone for the series–well, a frankly melodramatic tone, in fact.

But it’s quite entertaining despite the overwrought nature of the premise and the writing. The scenes after the initial catastrophe employ imagery reminiscent of the 9/11 attacks, urban warfare, and the evangelical Christian notion of the Rapture. What they resemble most, however, are the similar scenes in the great number of megadisaster films and TV documentaries of the past couple of years.

This is an interesting trend, given that the United States has been at relative peace in the international arena and was in the midst of economy prosperity when nearly all of these were conceived, written, and produced. Yet we have had TV movies about giant meteors colliding with the earth and threatening all life on earth, the moon being knocked out of its orbit and set on a collision course with the earth, and other such apocalyptic scenarios.

Similarly, a documentary on the History Channel imagined Life After People, showing the world reverting to its natural state after humans have died out, as buildings and bridges crumble, etc. And of course the movie studios have brought us numerous visions of mass destruction, including the Transformers films and many others, leading up to the forthcoming mega-megadisaster film 2012.

Why this sort of thing has permeated the culture at this time is by no means obvious, as noted, though the global-catastrophe scenarios offered by global warming alarmists and other environmental radicals are quite possibly a major cause.

Anyway, this type of mass-extinction imagery is common in the two episodes of FlashForward aired so far and is integral to the show’s concept. In the pilot episode we see everyone in the world simultaneously lose consciousness for 2 minutes and 17 seconds. We then find out–and see in flashbacks–that while everyone was unconscious, of course, innumerable vehicles went out of control and crashed, hundreds of aircraft fell out of the sky, swimmers drowned, people walking on stairways fell to their deaths, and so on.

An FBI team of which central character Mark Benford (Joseph Fiennes) is a member determines that everyone in the world seems to have "flashed forward" in their minds during the blackout, to a point six months into the future: April 29, 2010, at 10 p.m Pacific time.

Naturally, what both the audience and the characters alike want to know is how, and why? The pilot and second episode suggest that the event may have been the result of some human activity, as the team has discovered at least one person–seen in the crowd at a baseball game on video–was not asleep during the great blackout and does not appear to have been at all surprised by it.

Others think there’s more to it, and thus religion is a fairly prominent theme in the show. For example, FBI agent Benford’s babysitter tells him, "I think God did this. . . . To punish us." In the very next scene, a doctor tells Benford’s wife that his glimpse of the future saved him from committing suicide: "It’s like a sign from God or something."

Some of the visions prove to be highly disturbing, such as that of Benford’s wife, who sees herself having an extramarital affair, and that of Benford himself, who sees himself as having relapsed into alcoholism. Even worse, his partner sees nothing, which suggests that he will be dead in a few months. A phone call from a mysterious woman confirms this: she says he will be murdered in March of the next year–the Ides of March, in fact. The potential significance of the reference to Shakespeare’s Julius Caesar is obviously intended but left unexplained at this point.

Thus many people hope the future is not unavoidably fated but instead is still open to alteration by human effort.

That brings up another religious and philosophical issue, the thorny questions of predestination, or fate, and free will. The characters  in the first two episodes speculate about the matter in very practical, very human ways, and of course the question is by no means resolved at this point. It makes for some interesting viewing, however, as does FlashForward in general.