A Small Good Deed by a Big Movie Star

Demonstrating that there are some good celebrities around, actor Johnny Depp kept a promise to a Wisconsin boy. 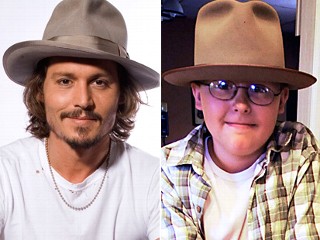 Last week, a package arrived at the Brand family home in Oshkosh, Wis., addressed to the Brands’ 12-year-old son Jack Taylor. It contained a used vintage tan and gray fedora hat and "Charlie and the Chocolate Factory" paraphernalia for the rest of the family, along with a note that read: "Here is a hat for you. Hope you like this and assorted fun bits." It was signed by Depp, the star of the film.

The actor promised the boy his hat back in April when the two met while Depp was in Taylor’s hometown filming scenes for his upcoming movie, "Public Enemies." But it was a promise the family did not expect him to keep.

How poignant: people’s morals have become so bad, and we’ve become so cynical as a result, that we expect others not to keep their promises. It’s a surprise when somebody exceeds our low expectations today.

I fully agree, Bob. We should be wise as serpents, but never descend into cynicism, for that is a lack of charity.

And then, of course, there is the other part of that cynical attitude that says: “Johnny Depp only wanted to generate some good publicity for himself by keeping a promise to a kid.”
Until shown otherwise, I’ll give Depp the benefit of the doubt.
Bob