A Pair of Mysterious Christmas Presents 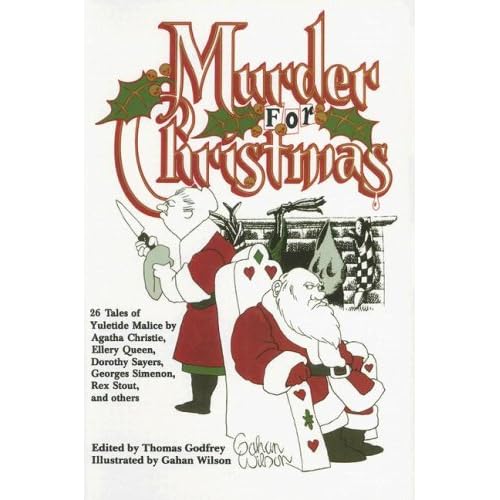 As an inveterate reader of mysteries and an enthusiastic appreciator of what has come to be known as the Christmas season, or Christmastime (aka Advent), I like to try to read a couple of Christmas-themed mysteries every year. This year, as I do every year, I’ll be rereading Ellery Queen’s simply brilliant novella "The Dauphin’s Doll," available in the superb anthology Murder for Christmas, edited by Thomas Godfrey.

The Queen story is about forty pages long, and is set in the same time period, location, and department-store and NYC apartments setting as the delightful Christmas film Miracle on 34th Street. In "Dauphin’s Doll," genius amateur detective Ellery Queen helps his father, Inspector Richard Queen of the NYPD, solve a particularly puzzling "impossible crime," the theft of a bejeweled doll from inside a glass case in a department store before the watchful eyes not only of the police but also countless customers.

The mystery is a poser, the solution is brilliant, the atmosphere is charming, the events occasionally surreal, and the resolution of the story is quite engaging. It’s a superb mystery story in the classic style, with an appropriate balance between puzzle, characterization, social interest, suspense, and a real sense of joy in life. I strongly recommend it and Godfrey’s anthology as a whole.

The other item I’ll be rereading this year is Fredric Brown’s Murder Can Be Fun. As I noted in an earlier article, Brown was a superb mid-century author of suspenseful mysteries that included very strong puzzles and usually quite normal people as the detectives. In Brown’s usual approach, the puzzles and mysterious events accumulate as the protagonist is pressed deeper and deeper into trouble, and the solution comes as a complete surprise but is usually fairly clued and plausible if not necessarily very likely.

In this nicely succinct novel, a former newspaper reporter now writing for a radio show realizes that the fictional murders he’s writing in his scripts for a proposed program are coming true—but he’s the only one who has ever seen the scripts. The book is rather light-hearted but includes some good puzzle work and a likeable protagonist. Brown was an expert at creating characters who are just one stumble away from being complete schlubs, and making the reader like and care about them in sympathy with their very humanness, shown in both their shortcomings and their sometimes surprising strengths.

As I noted in my earlier article about Brown, his mystery stories provide a vivid picture of the surrealistic carnival of self-indulgence at the heart of midcentury America, while never giving in to cynicism or despair. That makes them particularly enjoyable for those interested in seeing how our culture and society got to where they are today while also getting a strong dose of the positive values that must provide the foundation for any solution to our ills.