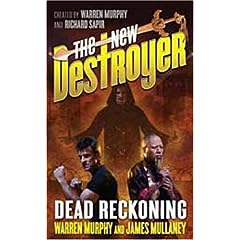 Note: Remo Williams is called The New Destroyer in this book because after the 1980s, publishers put out several years’ worth of rather inferior installments in the series after the new book’s co-author, James Mullaney, stopped writing for the series. Now that Mullaney’s back and the series has a new publisher, they’ve renamed the series to convey this new beginning.

Good news from the interview: there may be a new Remo Williams movie on the way.

I am a well-read person living in Japan. I mainly read the “I” novel. Please link to my website, if you do not mind.